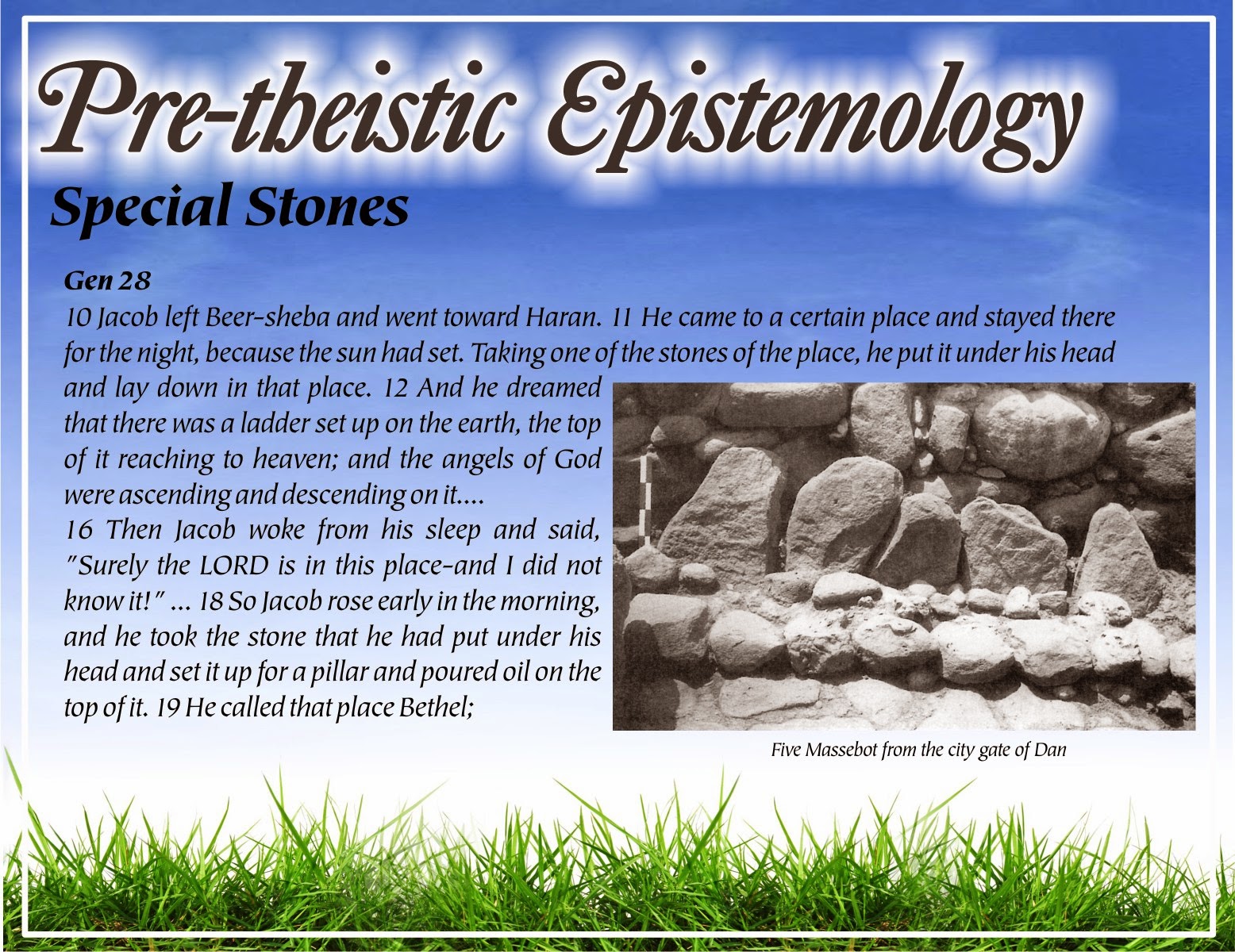 P.S. 2014-06-02 - I have just discovered an interesting article by Swedish Anthropologist Alf Hornborg: Animism, fetishism, and objectivism as strategies for knowing (or not knowing) the world. Alf presents very interesting insights, I personally would trace the beginning of objectivism to the shift towards ideological monotheism.
1 comment:

Many years ago, on one of my early birthdays, I was given a tricycle; beautiful, dark blue with a real chrome bicycle bell! I practised peddling on our driveway every weekday evening. The next weekend I was ready to take my “machine for a spin” during a family walk in a park. First I began cautiously, but soon I was riding quite fast. Probably too fast, because after a small slope I took a little too sharp a turn and rolled my tricycle. I ended up on ground crying. Dad turned back my tricycle while mom wiped my tears, cleaned few scratches on my knee with a wet corner of her handkerchief and blew pain away. Soon I cycled again and all the way home, only with newly discovered caution. Since then I have observed other moms, even the mom of my kids, using a little saliva to clean some of their babies’ scratches, if only with just a licked finger. I guess it must be some kind of a motherly instinct.
This Sunday’s Gospel reading opens with something similar. Jesus is reported using his saliva to bring healing to a blind man. The early church tried to eliminate any mention of this healing practice. Most likely Jesus healing with his saliva resembled some kind of magical pagan trick. Thankfully, three stories about this kind of healing survived (Mark 7:31-37; Mark 8:22-26 and John 9 - last two passages might be reworking of the same original story). I am convinced that deeper than any danger of pagan rituals is the loving archetype of instinctive, motherly divine care.
This Sunday I do not plan to spend much time on this technique of healing. We will be concentrating on different levels of sight, vision and insight. Yet I still find this healing technique fascinating, especially vis a vis certain breeds of orthodox and conservative Christians. They are famously preoccupied with the salvific BLOOD of Jesus (just how many Christian hymns there are bout blood!) But in the gospels, the first “body fluid” which brought healing and thus salvation, was not Jesus’ blood, but his saliva - and not a single hymn about it! ;-)

Beauty and Diversity of Biblical Cosmogonies


Now I would like to concentrate on two less known biblical cosmogonies (creation stories) one from Psalm 104 and one from the book of Job. 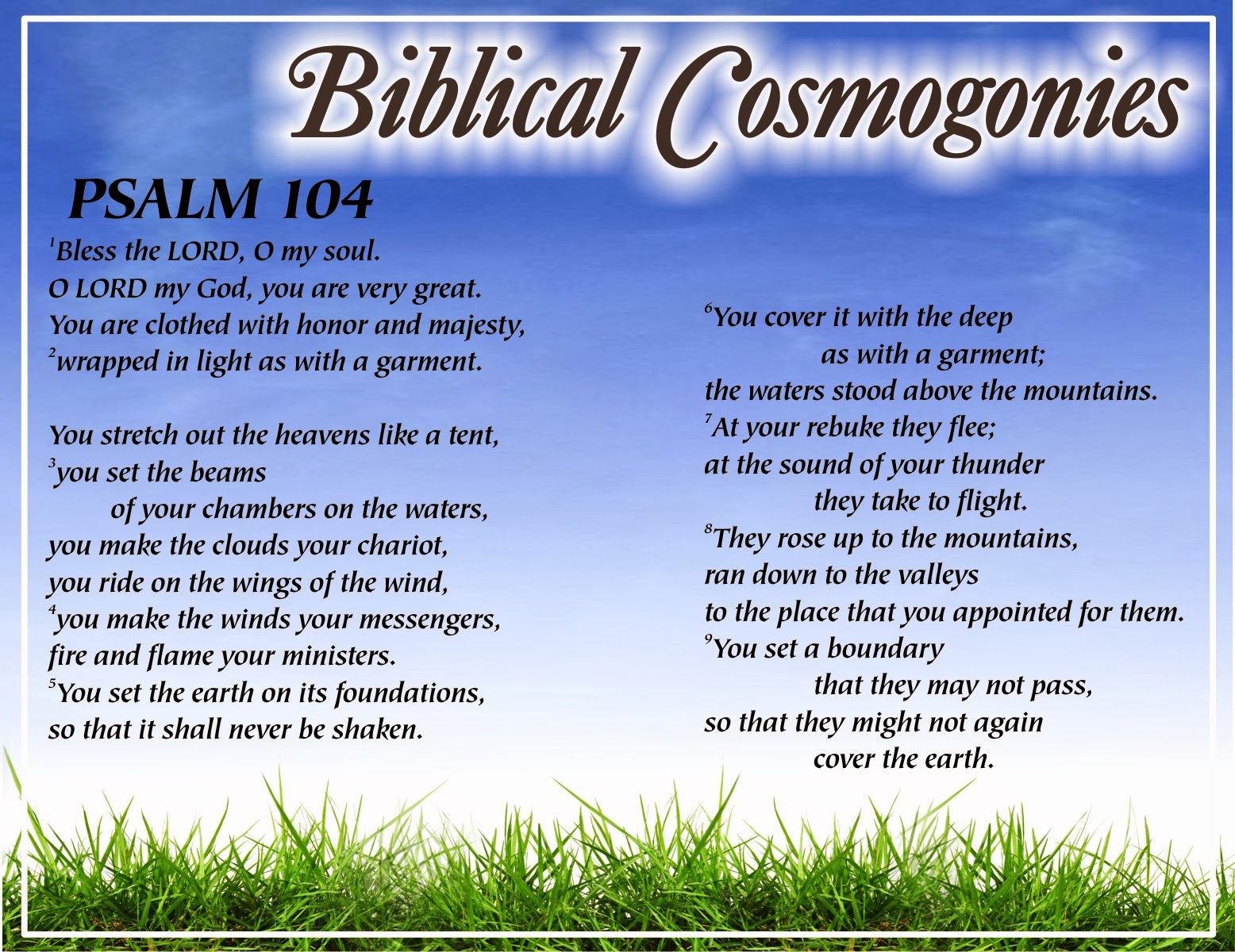 Now Cosmogony from the book of Job: 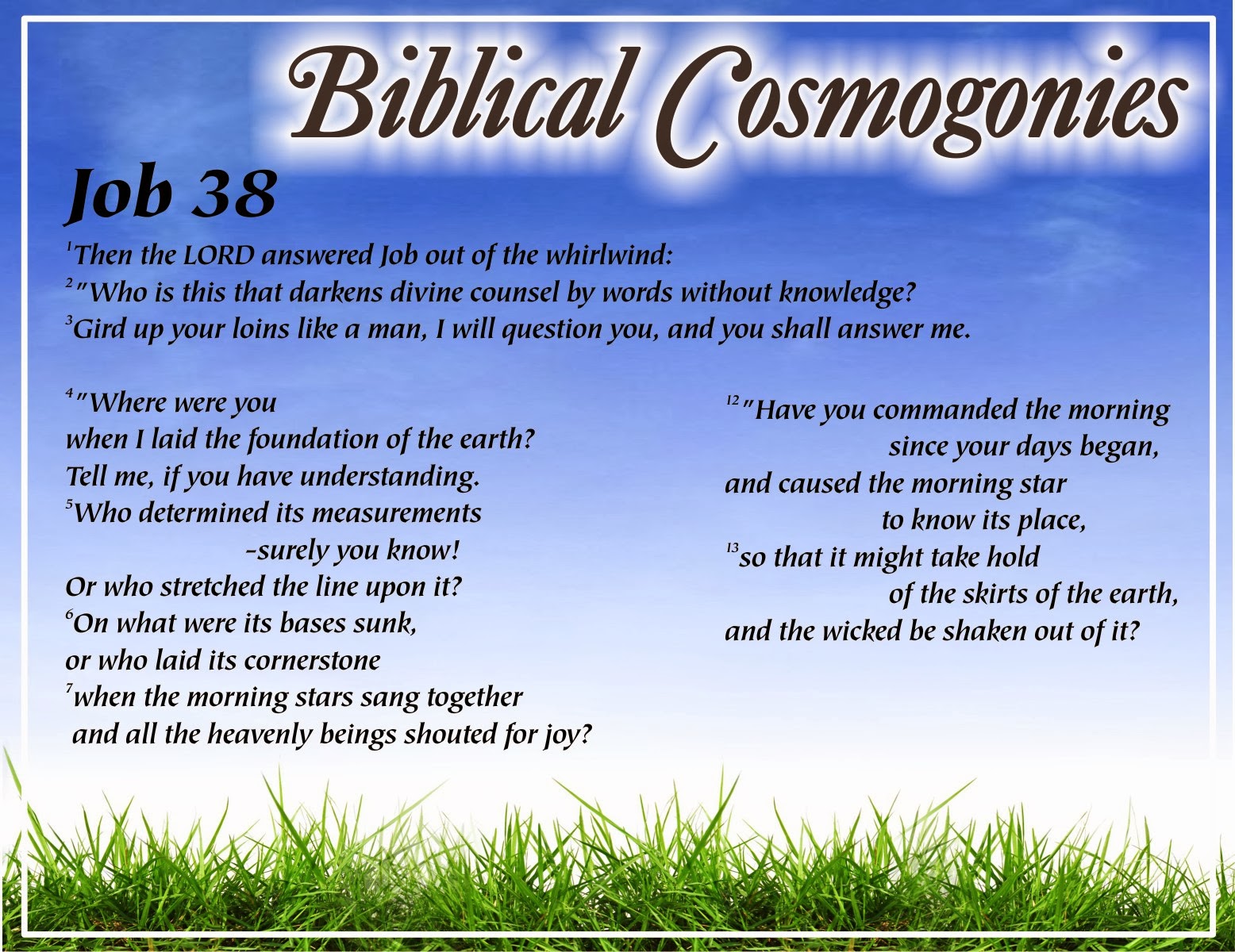 When we moved to America from Europe, the first thing which we did was to buy a garden windmill. After nine years spent in Prague in an urban metropolitan environment without our own garden, we were thrilled to have a garden, and we wanted to decorate and celebrate our front yard. We bought the brightest and most colourful windmill we could find. But as soon as we stuck it in the grass in front of our porch, we realized that something was not right. From our otherwise nice and friendly neighbours we started to receive surprisingly strange, and even hostile looks. Being fresh transcontinental transplants, we did not get it, but thankfully some members from our congregation helped us to understand. It all took place against the backdrop of that dark period just before President Bush dragged America to the war in Iraq and so our arch-conservative neighbourhood bristled with patriotic flags. We were probably the only ones without an American flag and certainly the only ones with rainbow colours. Our European upbringing did not prepare us for this degree of ideological flag-waiving. But from that moment on, we did it on purpose, we kept at least one rainbow windmill in front of our house. With every movement of wind the splash of colours brightened our days, stood guard against narrowminded imperial chauvinism, and expressed hope in a more peaceful future. This Sunday we will try to perform a similar windmill charm on some of the most famous ultraconservative biblical verses and concepts from the Gospel of John (“being born-again” or “God giving up His Son for the eternal egotism of some evangelicals”). Come to be surprised at how true theology, just like a splash of hopeful colours, can transform these gravely misunderstood verses like a charm.

And by the way, our neighbours got used to us, especially after I visited them in the hospital (although they were from Assemblies of God), brought them their cat from our tree, occasionally helped with snow and around their yard, and played with their grandchildren.
No comments:

This year during Lent and Easter I want to invite you to search for Paradise. But first we need to know what we are looking for, and we need to get some basic directions.
We can start with the Bible. In the New Testament Greek, Paradise is called παράδεισος “Paradeisos.” This word also appears in the Hebrew Bible, there it is rendered as פַּרְדֵּס “pardēs”.
All these words: Paradise, Paradeisos, Pardes, are clearly related. They sound similar, they contain the same consonants, they are coming from the same verbal root, but they are not native to any of these languages.
All these words are loan words from yet another language. Paradise, Paradeisos, Pardes are all borrowed from an old Avestan expression “pairi-daēza”. In this ancient Iranian language Paradise actually has a meaning; it can be translated as “encircled with a wall.” And it was not just any place behind the wall; it was more specifically a park or a garden.
These Iranian and horticultural origins of Paradise make very good sense. Apples, Apricots, Peaches, all originated in different parts of Asia. Alexander the Great is often credited for bringing them to Europe. But he did not cultivate them, he did not even collect them from their original homelands, he just took them from Persian gardens where they had been cultivated for centuries.
Persian gardens were large, important and famous. Gardens were integral parts of all Persian royal palaces, and royal princes were educated in many different disciplines and skills, but also in gardening. Gardening provided the future rulers with an excellent training in patience and self discipline.
Thus when we are looking for Paradise, when we are looking for this archetypal place of heavenly harmony and bliss, we need to look to Persia (today’s Iran) and its gardens. Can you imagine, paradise originating in Iran? But even further, can you imagine, paradise not as an outward reward, but a spiritual challenge and discipline and daily work?
Gardens are here only an image and training ground. The whole world is meant to be the paradise! If only we started to care for one another as well as we care for beautiful flowers and care for worldwide nature as we are able to care for orchards.

Passion flower not only for Lent 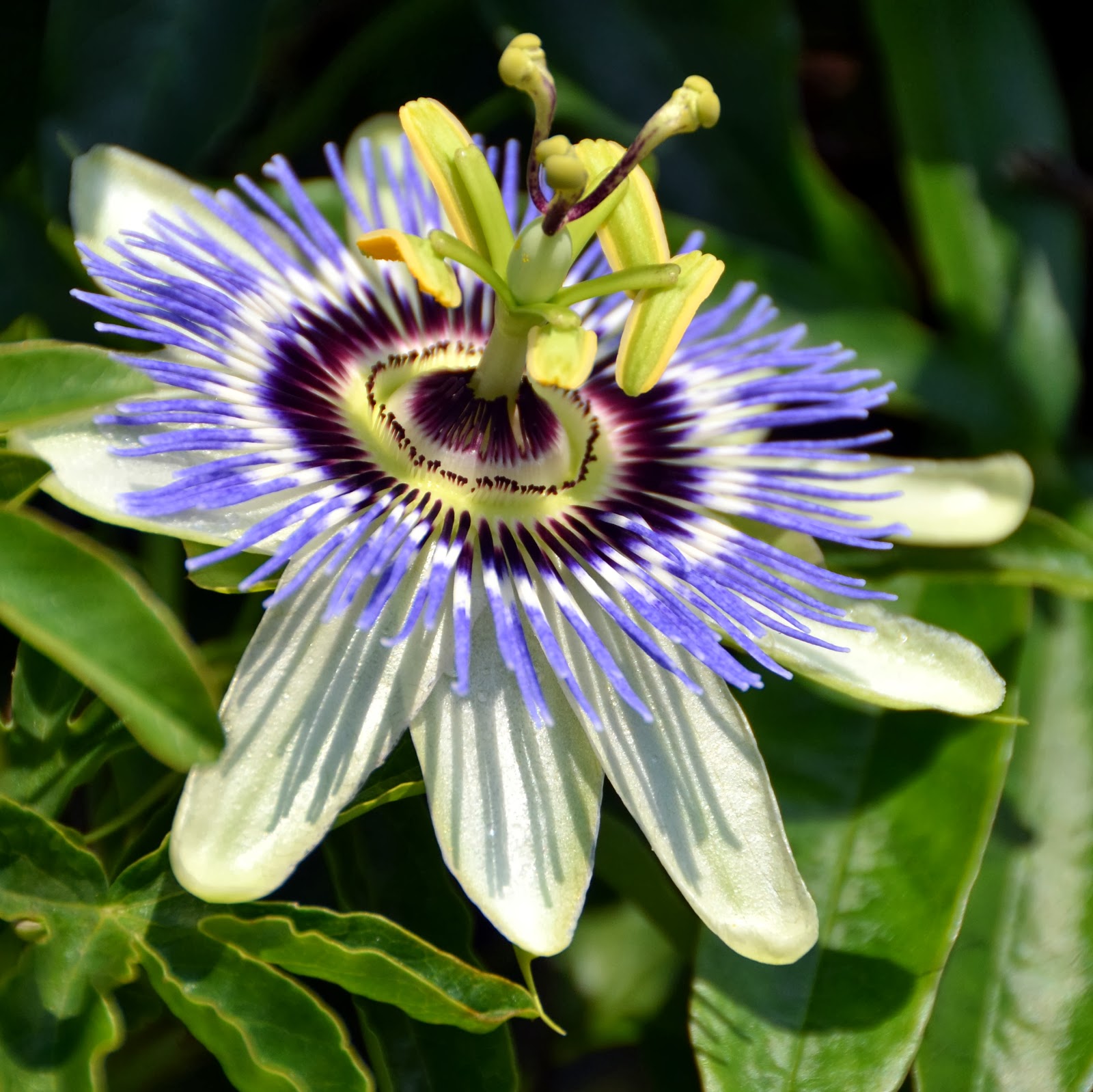 I took this picture on the 28th of May 2012 in the Brooklyn Botanical Garden. I was so intrigued by this flower that I wanted to learn more about it. Little did I know how interesting its story is! This climbing vine, native to South America, is called Passion flower. And its story is truly striking. When it was discovered by the first European missionaries in the early 16th century they called it Passion flower, because they saw in this flamboyant flower the Passion of Christ: The pointed tips of the leaves were taken to represent the lances of the Roman Soldiers. Tendrils represented the whips of flagellation. Ten petals stood for the ten faithful apostles. Radial filaments resembled the crown of thorns. The mallet-shaped ovary with its receptacle was seen as the hammer. Three stigmas were the three nails and the five anthers below them symbolised five wounds. Finally blue(purple) and white were colors of heaven and purity.
When, still full of astonishment, I shared this story with my friends and colleagues they gave me strange looks; for them all of this was a perfect example of superstitious medieval faith (tainted with the outrage of substitutionary atonement, they claimed). Perhaps it was so. But I remain enchanted by this story and especially its origins. What kind of a mind, in what kind of mental state, can look at such a flower, any flower(!), and see a divine story? It had to be a pre-modern, pre-scientific mind, but at the same time a intriguingly, even luringly, creative and playful mind! Was it a poet, a child-like soul of the Little Prince, a prophet, a shaman-like psychic, a person deep in love, a visionary, or an environmentalist (before environmentalism)? One thing I know by my own, direct, first-hand experience: This story of the Passion flower opened my eyes to different stories, and changed the way I look at other flowers, at other plants, at nature in general. And not only how I look at them, it changed the way I want to live my life, gentler towards other beings, listening to their stories.