The census when Quirinius was governor of Syria

In those days a decree went out from Emperor Augustus that all the world should be registered.
This was the first registration which happened when Quirinius was governor of Syria.

Those are familiar and well loved words opening the Christmas Story in the Gospel of Luke. They are associated with the joy of Christmas but behind these words is hidden a major and violent upheaval. What seems like an innocuous dating remark about a census was actually a bitter grievance which triggered a decades long guerilla war. It was started and led by Judas the Galilean and his resistance movement which became known as the Zealots.
How could a census lead to a guerrilla war? Because an ancient census was not primarily about better governance but about collecting taxes. In fact one of the most unjust forms of taxes - per capita tax (a head tax). Some time ago I explained it to the children in our Sunday School with pieces of pasta.

These are the tricks which some politicians play with taxes. It looks like a just arrangement, it looks like a good deal. All pay the same or, for instance, all receive a tax cut - but in fact it is utterly unjust and unfair. Judas the Galilean quite rightfully protested calling this tax “not better than slavery and a means to take away the nation’s liberty.” And because of this census and taxation injustice he started a seventy years long guerilla war against the Romans and their unjust ways.
And this is something you might not know about the Christmas Story.

In worship this Fourth Advent Sunday we will search for hope in the midst of such injustice and bureaucratic abuse of power and we will look for it from the perspective of pregnant Mary traveling to Bethlehem in her third trimester.


And for those who read this far here are few more details:
The Gospel of Luke is referencing historical figures and events, but their rendition is historically inaccurate and outright implausible.
1) Caesar Augustus did begin the practice of a regular and periodic count (Lat census, Gk apographe) of the population of the provinces of the Roman Empire but it never was a universal census of the entire empire, as described in the Gospel.
2) Publius Sulpicius Quirinius (c. 51 BC – AD 21) was a Roman aristocrat and a successful politician/administrator. He indeed was a governor of Syria, but this dating does not fit with the rest of the Gospel of Luke by about a decade.
3) Roman census involved the counting of the population and valuation of individually and corporately held property. It did not require a return of individuals to their ancestral homes.

The primary reason of this text is theological. Biblical prophecies predicted, that the Messiah was to come from Bethlehem. Jesus was known to come from Nazareth. The Evangelist Luke therefore created this story about the census travel to explain why and how Jesus of Nazareth could come from (be born in) Bethlehem and thus fulfill the ancient prophecies. The author of the gospel of Matthew had the same problem and solved it differently - Jesus' family was originally from Bethlehem, but escaped via Egypt to Nazareth.

Thus indeed the primary focus of these nativity stories was theological. They confirm the fulfillment of biblical prophesies and rebuff adoptionism - Jesus was not adopted to be the Son of God at any later stage because of his special character or spiritual perfection, he was the Messiah from the moment (or even from before) of his birth.

(Or why to sing rorate rather than carols in Advent)

Advent is a precious, beautiful and meaningful period of preparation for Christmas. In its true form it is a time of contemplation and self-examination and thus very important for our  psychological and spiritual health. A genuine Advent is sine qua non for truly joyful celebration of Christmas. How can we truly rejoice in Christmas if we are celebrating it from the beginning of Advent? In every store, supermarket and shopping-mall we are bombarded ad nauseam with Christmas music from as early as Thanksgiving. In fact it is an emotional ploy to manipulate us into compulsive shopping. And our culture went along it. Some families are putting up Christmas trees already before the first Sunday of Advent! And even in many churches one could hear carol tunes deep into the Advent season. But Advent is not watered-down version of Christmas! Our ancestors of faith knew better. In Advent they used to get up early before daybreak and went to church to sing Rorate Plainsong and say their Advent pensive prayers. The true joy of Christmas is unthinkable without self-reflection and preparation of Advent, just like the Easter is not the same without Lent. Replacing reflective Advent with a stretched-out and diluted prelude to Christmas does not make Christmas better, in fact it preempts Christmas and steals away its true joy. At Rutgers we strive to resist the dictate of shallow ideology of consumerism and live our faith contra-culturally.

Open up, O heavens,
and pour out righteousness.
Let the earth open wide
so salvation can sprout up
together with righteousness.
I, the LORD, created it.
No comments:

The Advent season brings to us the story of John walking through deserts and baptizing in the Jordan river. Interestingly, John was not the only one doing something like that at that time. During the time of Cuspius Fadus as the procurator of Judea there was a prophet Theudas who took people to the desert promising them that he would divide the waters of the Jordan River and bring them back to the Promised Land. But Fadus sent a heavy cavalry and stopped them before they even tried.
When Porcius Festus governed Judea, there was the so called “Egyptian prophet.” A man who allegedly came from Egypt, gathered a substantial number of people, took them for a round trip through the wilderness and brought them up to Jerusalem with a promise that he would make the walls fall down like Joshua did at Jericho. Festus sent troops and scattered them off.
Jewish historian Josephus Flavius also has a summary report of more charlatans, imposters or deceivers (as he calls them), who misleading many people, made them act like madmen and go to the desert with promises of deliverance and social, economic and political changes.
There are clearly some common repeating features: taking people to the desert/wilderness, crossing rivers, toppling walls. In fact, they were repeating old religious archetypes by reenacting Exodus and the Taking of the Promise Land while each had some special feature or emphasis.
Among the biblical scholars there is little doubt that John the Baptist belonged to this group of reenactors. John’s special feature was the “washing” in the Jordan river and then sending the baptized one by one to infiltrate, retake and repopulate the land. Thus, in a more peaceful way start all over again a just and peaceful society as God would have it. John the Baptist was indeed this prophetic reenactor of liberation. And that is something not all might know about him.
Join us this Sunday in worship as we ask what would John the Baptist do today? Would he still be by that muddy creak dividing Israel and Jordan baptizing the American fundamentalist tourists on that “exact” spot as he did those thousands years ago? Or would he be leading and supporting people through the Sonora and our other southern deserts? Or would he be helping people to cross the Rio Grande, Colorado River and its canals? 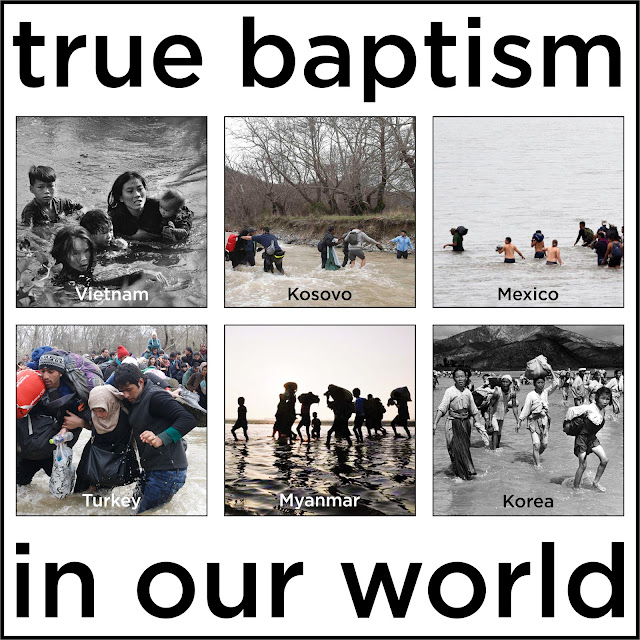