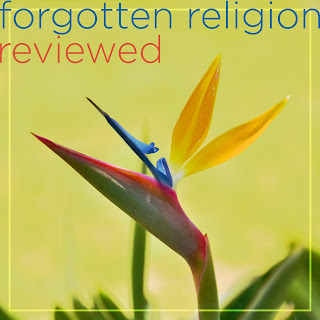 There is an alternative take on religion, a completely different religious world from what is generally perceived as religion today!
I realized it as I entered Ke‘ekū Heiau at Kawa Bay of Hawai‘i Island. I tried to visit this open-air worship space for a number of years and had been always prevented by high tides and strong surfs. Now I finally stood by the entrance and it was clearly an active place of worship and also undisputably closed! As I stepped over two crossed wooden poles, I knew I was trespassing! Intellectually, the visit and assessment of the shrine was uneventfully routine, but my guilty conscience triggered in me something deeper. I became painfully aware of an alternative religious paradigm. While my own religion and all modern religions try to pull people into their churches, synagogues, mosques, temples, gurdwaras... there clearly was a type of religiosity, which wanted to keep people out!
From that April Monday last year I have been brooding over it. I refreshed some of my old academic readings, I searched some new religious and anthropological literature. And I formulated for myself a tentative typology of this old/alternative form of religion:
I confess, this is a highly schematic typology. There have hardly ever been these extreme types in their pure form. But I am convinced that all current religions grew up from the old type, and in one form or the other preserved some traces of it. The old style might be largely forgotten, rejected, suppressed, even persecuted against by modern forms of religion - but what I call here the old religious paradigm represents our shared roots. I think that in our times of growing religious antagonism and intolerance, it might be important and spiritually enriching to become aware of it and search for the remnants of our forgotten religion buried deep in the traditions of our own faith.
No comments:

The study of the Bible and its ancient manuscripts saves me from fundamentalism and religious intolerance. The more we know, the better we are protected against bigotry. Allow me to take you along and show you how I spent Monday afternoon (my day off) this week. 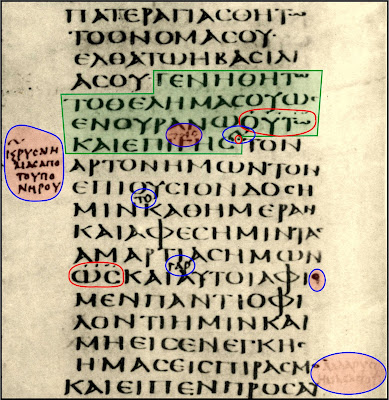 This snippet is from the Sinai Bible, the oldest surviving, almost complete Bible. It was produced, hand written, in early IV century C.E. most likely in Alexandria. In this picture is the text of the Lord’s Prayer from the Gospel of Luke (11:2b-4). And here is my working translation of the original text as written by the hand of the first scribe:


Father,
Your name be holy!
Your kingdom come!
Your will be done as in heaven, thus on earth!
Our daily bread give us by day!
And forgive us our sins,
as even we forgive our debtors!
And do not turn us in for trial.

The Gospel of Luke contains a shorter version of Lord’s Prayer while Matthew (6:9-13) has a longer version, and the original Luke version was probably even shorter than what we have in our text. The green field with the text Your will be done as in heaven, thus on earth! is absent from the oldest preserved fragment in the Bodner Papyrus No.75, which predated the Sinai Bible by another century. Most likely this petition was inserted from the Gospel of Matthew or from church liturgy.
What makes this picture interesting is the great number of manuscript corrections. Blue circles in our picture represent grammatical corrections and textual additions. Red circles and pink fields represent deletions. On the margins of our textual column are also two larger textual inserts. One on the lower right side was later erased (yet, thankfully, still remains readable), and the one on the upper left margin was questioned by a later scribe (by a dot beneath the tilde mark in the text). Both these larger insertions attempted to include a petition deliver us from evil into different places of the prayer and again came as a borrowing from the gospel of Matthew.
In total, there were at least two, possibly three or more correcting hands (scribes) who made at least twelve changes or corrections of changes in the space of three verses. Think about it: twelve textual variants in this short prayer, twelve! And this is one of the oldest biblical manuscripts and an important source for our biblical translations. Now you know why an honest study of the Bible is the best vaccination against Christian fundamentalism, biblical literalism, claims of the biblical inerrancy and all sorts of religious bigotry.
Don’t get me wrong, I do not dismiss biblical text or Luke’s version of the Lord’s Prayer. I actually find them greatly fascinating and inspiring. For this reason I invite you to come to worship this Sunday and pray together this deeply meaningful and transformative prayer of our Lord as we seek its true meaning for us today.
Here is a YouTube video clone of this blog.

Preserve for us and future generations
enough food for everyone
with fresh air to breath,
clean water to drink
blue planet to inhabit.
May governments around the world
institute the Unconditional Basic Income.
Let police and courts treat people fairly
regardless of their class, nationality or race.
No comments:

New York City, for its size, has surprisingly clean air.
Unfortunately we still have serious pollution problems and different than you might expect. Try to spy out any stars at night, for instance. Even on a clear crisp night you might barely catch sight of a few of the brightest stars and count yourself lucky if you can make out a constellation. It is because of NYC light pollution which can be visible from as far as the Catskills. And it is a true pollution problem with real environmental and health impacts. New York is proverbially a city which never sleeps but often I think it is because it has difficulty sleeping in so much artificial polluting light. And it is not a problem only for people; plants and animals are also known to struggle with so much artificial light being disoriented in space and time in consequence.
Another serious problem is our noise pollution. We are surrounded with the constant clang of concentrated active life, buzzing and honking road traffic, rattle of helicopters, humming of AC units, blare of sirens, and all that noise is easily trumped by horrendous roar of subway trains. Even our parks are so noisy that it is difficult to hear any birds. And if you hear them, they sing at the top of their voices and their songs sound patently hoarse. Some people might not hear them at all because of their hearing problems caused by all that noise.
Ancient spiritual exercises are silence, the art of quiet listening and contemplation. That is where the lectionary reading will lead us this Sunday. Meanwhile you can try it on your own as evening approaches any day; let dusk come on its own and with its quite pace; use that time to be silent with yourself and with God; and switch lights only after it gets truly dark. Such quiet time can be a true spiritual detox balm.

Every summer we undertake an electronic cleanup of our office computers. Once in a while we discover some interesting or important files. This year we found a dust gathering disconnected hard drive in the church library and on it was what appears to be a fragment of an ancient e-mail from the collection of Manhattan Bible of Henry Rutgers. Here is all we were able to decipher and partly reconstruct:

Paul@ApostolicEnterprise.org
to beloved Henry@ManhattanBreweries.com
Grace to you and Peace from God our Parent and the Lord Jesus Christ!
Before all things, I pray that you are well and that you prosper on your farm in New Amsterdam.
I thank God at all times for your faithfulness and your hospitality to me and all our sisters and brothers. Your dedication to our faith and education of all is exemplary.
Dear brother, know that I plan to sail to your shores and hope to visit you soon, please prepare for me a small room. Before we meet face to face we can always use book of faces or as some call it face-book. I found it to be a useful tool in our ministry. Don’t allow it to be used only by evangelical fools for their self-serving deceptions. They steal all churches and engage in church identity theft, hiding behind reputable names but their self-righteousness is unRedeemable. In tears I admit that the message of the cross has many adversaries in our world and especially among those who call themselves “brothers” but know that hashtags of divine #socialjustice, #progressivefaith or #allarewelcome cannot be easily hushed!
I Cc Luke and Erastos who are also sending their greetings.
The Grace of the Lord be with your spirit.

Everyone can easily see that this is a pious forgery, since at the time of Henry Rutgers the name “New Amsterdam” had not been used for more than a century. But this false email letter, nevertheless, brings forward an interesting question of apostolic social networks and latest communication tools. Join us this Sunday when we worship with “#hashtags @rutgers” 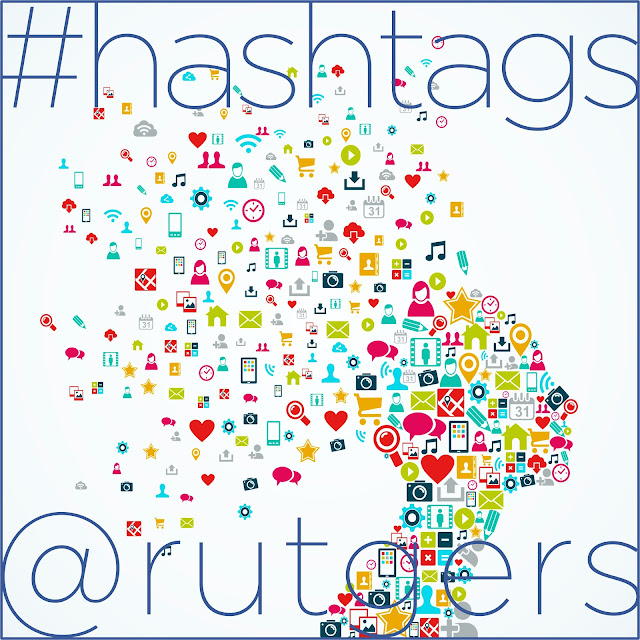