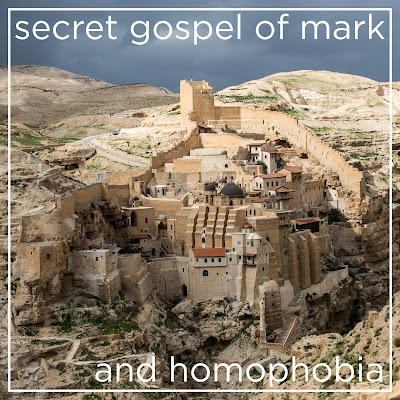 Now imagine this -- a brilliant and eccentric American scholar researching an old library in a tower of an ancient Middle East monastery paging through medieval manuscripts reading ancient writings and finding by a chance a quotation from a thus far unknown secret gospel. That quotation was part of a letter from the second century which mentions an ancient esoteric sect. Mystical interpretations are involved, secret initiation and magical rituals. There is even a perceived sexual innuendo. All is wrapped in cutting edge linguistics and theology and also involves accusations of ancient, medieval or modern forgery. And then this unique manuscript mysteriously vanishes from the Orthodox patriarchate in Jerusalem. To the best of my knowledge the only thing missing in this plot is a murder, otherwise it could easily compete with bestsellers like Umberto Eco’s “The Name of the Rose” or Dan Brown’s “The Da Vinci Code.”
But it is not fiction, this is a real part of recent biblical and apocryphal theology. Biblical theology can indeed be thrilling like best-selling mystery novels! And that perceived sexual innuendo played an unfortunate and important role as there were concerns about homo-erotic undertones. Thus Christian homophobia of the sixties, seventies and eighties and to some degree and in some circles even until now was likely behind the disappearance of precious manuscript. Without the physical manuscripts those accusations of modern forgery cannot be conclusively resolved in which ever way. This is how modern homophobia impacted biblical scholarship. That mysterious text is in almost every critical edition of early Christian Apocryphal Writings but with a note about its questionable authenticity.
As we remember 50 years from the Stonewall uprising, and 50 years of struggle for LGBTQ rights this is something very few people might know about the dark legacy of homophobia in the realm of biblical scholarship.
If you are intrigued, join us this Sunday to learn more about The Secret Gospel of Mark and its uneasy modern history tainted by homophobia.
No comments:

Today I want to talk to you about Elephantine Papyri but first allow me to share with you this rather lengthy introductory parable.

Imagine you are a member of an extended family. In your family you have a shared family story handed down from generation to generation and part of this lore is also an old photo album. It is called “The Album”.
You remember sitting with your grannie paging with her through all those old pictures and stories, naming people, remembering memories; here is uncle so and so, and this is great-grandfather who fought in the Civil War, this is a grandfather’s maternal cousin whose farm burned down to ground, and this is a great uncle who was a supreme court judge in some European country, this distant aunt married to a builder of a famous viaduct, and here is paternal nephew, he was a clergy and became famous missionary. All well documented in ancient sepia pictures and labeled with names and dates, organized into an easy flowing and persuasive family narrative.
You even received your own copy of The Album when coming of age. It is a true family heirloom. The Album records occasional trauma, but nothing really troubling,  mostly it is a real source of family pride. Few minor glitches can be blamed on history, times and customs were different. All in all The Album shows and teaches deep and generally commendable family roots.
But then, while cleaning an attic of a family residence a large box of ancient correspondence and documents surfaced. Those ancient documents were written in difficult cursives and in several languages. It took some efforts to decipher and even years later it is still not fully finished.
First you noticed names, events and dates you knew from The Album, but then things started to become ever more complicated. Not everything can be put together neatly and there is no easy and simple narrative anymore. Family history is turning into something substantially different and so complicated! You realize that The Album, your family album is largely just storytelling. Some events clearly happened quite differently and some might not even have taken place at all.
You also realize that the storytelling hiccups and gaps in The Album can be often explained with the documents from the box, just like some of the palpable tensions around this or that uncle and many of those annoying family taboos and strange behaviours can also now be explained.
Reaction among the wider circle of relatives was quite diverse and divided. Some relatives threw the entire photo album into the recycling bin stating they always thought grannie was making things up and that it is all just babbling of a senile old woman irrelevant for their modern lives.
Other relatives, on the other hand, became all agitated. They made the album into a real shibboleth. In their part of the family children still memorize The Album and are made to swear on the veracity of every single picture and name. In their family branch everything is measured by The Album and its assumed lessons. The Album, thus divorced from any history and reality, is used to push some extreme agendas.
And you are in the middle of it. You love the old Album. You respect your grannie and her story as much as you are now aware that much of it was just fabulation. There are lessons to be learned from grannie’s Album just as there are lessons to be learned from the documents which surfaced in the attic.
Even more importantly, there are truly deep insights to be learned on the intersection between The Album and the archive, deep insights and appreciation for the family history and for grannie with all her complexes, great insights for your own self-understanding and understanding of the world.

I can imagine you can relate to this parable. We all know different aspects and parts from our own families. But I wrote this parable about the Bible (the Album) the church (the grannie-representation of institutionalized religious memory) and about documents uncovered by archeologists, anthropologists and theologians in the last one hundred years or so. Sholars found many old archives and archeological records which are complicating the shared lore. Today we will talk specifically about Elephantine Papyri ....