This Sunday we will celebrate the Biblical Thanksgiving (according to Deuteronomy 26). It shares many surprising similarities with our current American tradition.

Just like our American tradition, Biblical Thanksgiving does not have solid historical roots.
The American Thanksgiving has flimsy historical grounding. Early European colonists did celebrate Harvest Home, but as such it took place much earlier in the season, just like it is customary in Europe. Colonists were not dressed in those black and white costumes, that was for them a dress for church and not for a joyful festival. They did not eat turkey but venison and they would hardly recognize most of our traditional thanksgiving dishes. All these aspects were designed as part of national mythology in the Victorian Era. The same is true about a Biblical Thanksgiving which also had very little historical grounding and we will touch upon it.

Just like our American tradition, Biblical Thanksgiving was created for political/ideological reasons.
American Thanksgiving in its current form has been designed to inspire cohesive spirit in difficult and dark times of the Civil War. (Have you noticed that the media never forget to report how our soldiers also celebrate?) Many aspects of a Thanksgiving celebration betray its historical origins. The story about Pilgrims and Indians, the location of the story, depictions of ancient dresses, even traditional thanksgiving recipes and order of dishes did not correspond with historical reality, but were an idealized projection - how people in the 1860s in the Union part of the Nation visualized the early colonists and their feasts. Similarly ideological purpose can be observed in Biblical Thanksgiving and we will touch upon it.

Join us, migrants and refugees, in Thanks Giving.
No comments: 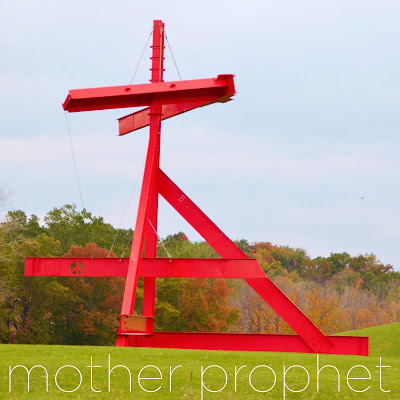 This week I picked for our bulletin cover this monumental sculpture called “Mother Peace” by Mark di Suvero.
It is a 42 foot tall red steel tower with several moving parts. At the top is suspended A large “V” and beneath is attached a large swinging ram with a prominent peace sign burned-cut into it. Mark di Suvero originally installed it in 1970 in front of Alameda Courthouse after he was sent to jail for anti war protests. Local judge and conservative potentates were provoked by the peace sign and symbolism of this sculpture and had it eventually removed in 1974. Nevertheless, Mother Peace found a new home and it still gently swings in the wind prepared to crush open gates of militarism and injustice.
I picked this sculpture because this Sunday’s lectionary reading brings to us the story of Hannah. She was a mother of a prophet Samuel but herself the eloquent prophet in her own right. She will teach us how bitter experiences of harassment and persecution can sharpen our sense of justice and teach us to stand for what is right. Interestingly in our faith tradition, this is the role often reserved for women and mothers. 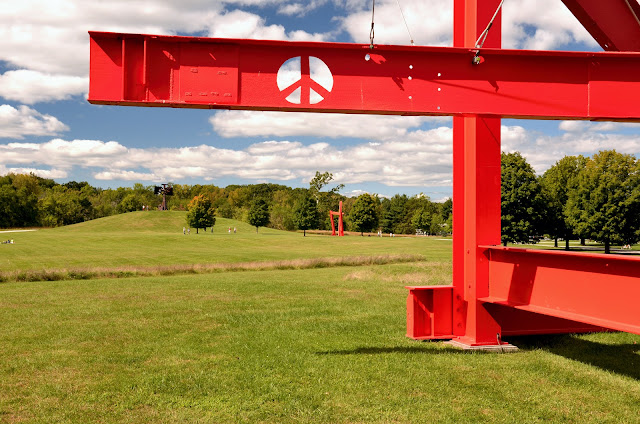 (And if you want to see Mother Peace, you will find it at the Storm King Art Center located only fifty miles north of Manhattan, just about one hour drive by car. Mother Peace is only one of the masterpieces sprinkled over the beautiful setting of an informal English-style park. I believe Storm King Art Center must be the largest modern sculpture gallery in America, if not in respect to the  number of art pieces then certainly in respect to the quality of the art collection and especially in respect to the cumulative size. It is a beautiful gallery especially in autumn, but worth visiting at any season.)
No comments:

For the Love of Birds

Many of you might know that English is not my native language. No matter what I do, I am bound to make mistakes, sometimes stupid, sometimes clumsy, sometimes unnecessary, often funny. Since the inception of this blog I had a great and selfless helper - Mary Birchard - who regularly checked my spelling, tried to cut up my unnecessarily long sentences, corrected my “international” prepositions and helped me especially with the tricky (tricky for me) English articles. She often joked that she would leave me two boxes one with “a-s” and the other with “the-s”. Unfortunately, she did not! Mary died suddenly yesterday and I am heart-stricken.
But Mary left me something else and even more important than English gramar - she initiated all our family into the love of birds. I learned to look around for birds. And especially during my different exotic holidays I used to play with Mary “Can-you-name-this-bird?” game. I would take a picture of a bird, send it to Mary and within few moments she would respond with the name. Always she did it, and she was never wrong. Just a few times she would give two options, and one was always correct.

I attach a picture of a Pacific Golden Plover which I took on the ancient Hawaiian burial ground in Ka‘u. Golden Plover is one of Hawaiian ‘aumakua, in Greek psychopompoi. May the birds she loved so dearly accompany Mary on her journey! 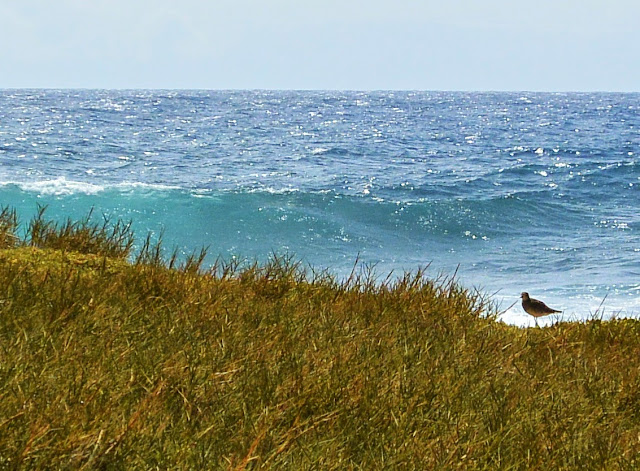