What is more precious than gold? And what gold sparkles more than gold?
Last Monday a small group from our church went for a bible class field trip to the Metropolitan Museum. We visited the soon-ending exhibition “From Assyria to Iberia.” It offered us great insight into the Near Eastern and Mediterranean Iron Age, an important period for understanding the Hebrew Bible.
We saw and discussed the famous Tel Dan Stele and we observed several centuries of development of writing. We were impressed by imposing Assyrian bas-relieves and we admired marvelous Phoenician ivories and bronzes. But many of us were particularly captivated by a special kind of ancient gold jewelry.
Several jewels in the exhibition sparkled and glittered as if made from some brighter gold. On closer inspection we could see that these jewels were covered with minuscule golden grains, the tiniest little balls you can imagine, often smaller than a fracture of a millimeter.
Classical optics informs us, that a surface covered by granules is visually shinier than regular polished metal. A plate of metal reflects light almost entirely in one direction (similar to that of a mirror); while a high number of small beads behaves very differently: a spherical surface reflects light in many directions and this effect is cumulatively maximized when many balls are set side by side. This phenomenon is called diffused reflection.
Jewelry granulation provides an almost uniform dispersion of light; thus it gives the impression that a surface covered with granulation is shinier than a regular polished surface.
This highly sophisticated jewelry technique appeared in the middle bronze age Mesopotamia and slowly spread around the ancient world. Golden granulation was one of the highly prestigious (and also tightly guarded) technologies which were kept among artisans working in royal workshops. Nevertheless this technique continued spreading by the way of social and political phenomenon of gift giving.
Friendly or neutral kings competed and ranked each other by exchanging gifts of high technological finesse. The better and more valuable the gift secured to the giver the higher level of prestige. And alliances between higher and lower monarchs were sealed with transfers of these prestigious technologies and exchanges of artisans.
This is something for us to think about this Sunday as we mark the Epiphany. The epiphany story of Magi is most likely legendary and non-historical. But even as a legend it grows from a rich soil of the Ancient Near East tradition of political gift giving and the artisan and scholar visits.
Come this Sunday to search for an answer to the question: what is brighter and more precious than even granulated gold?
1 comment: 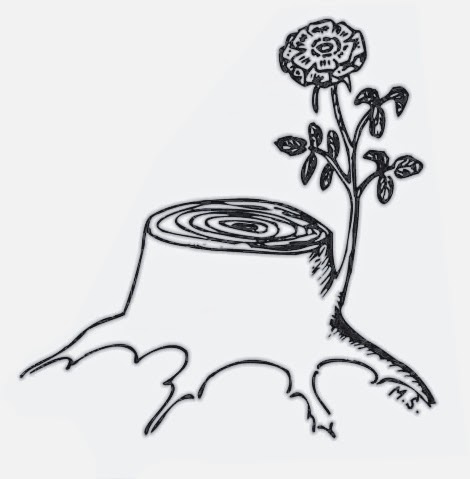 Lo, how a rose e'er blooming
From tender stem hath sprung,
Of Jesse's lineage coming,
By faithful prophets sung.
It came a floweret bright,
Amid the cold of winter,
When half spent was the night.
Isaiah ‘twas foretold it,
The rose I have in mind,
With Mary we behold it,
The virgin mother kind.
To show God’s love aright
She bore for us a Savior,
When half spent was the night.

Perhaps unrecognizably, this old hymn reflects the origins of the Christmas trees. Behind the hymn’s lyrics is a famous biblical prophecy from the book Isaiah (11:1):
A branch shall grow from the stump of Jesse,
and a shoot from this root shall bear fruit.
And Isaiah on his part is masterfully recasting an ancient mythic image of paradisal tree of life. A tree or trees which bear fruits twelve times a year and its leaves have healing powers as we hear about them from Ezechiel 47:12 or Revelation 22:1ff. Clearly ancient Middle Eastern prophecies did not envision any pine trees (our Christmas standard), but what could the reformation Germans do? In their home, pine trees were the only green trees at this season so they hang on it apples and later oranges or chocolate treats (now glass balls and other decorations) to stand for fruits and pretended that pine needles were those healing leaves. Before all this, ancient mythical imagery got almost completely forgotten and only unreflected customs remain.
Come this Sunday to search for other trees of life and different faith traditions with trees of magical healing leaves. 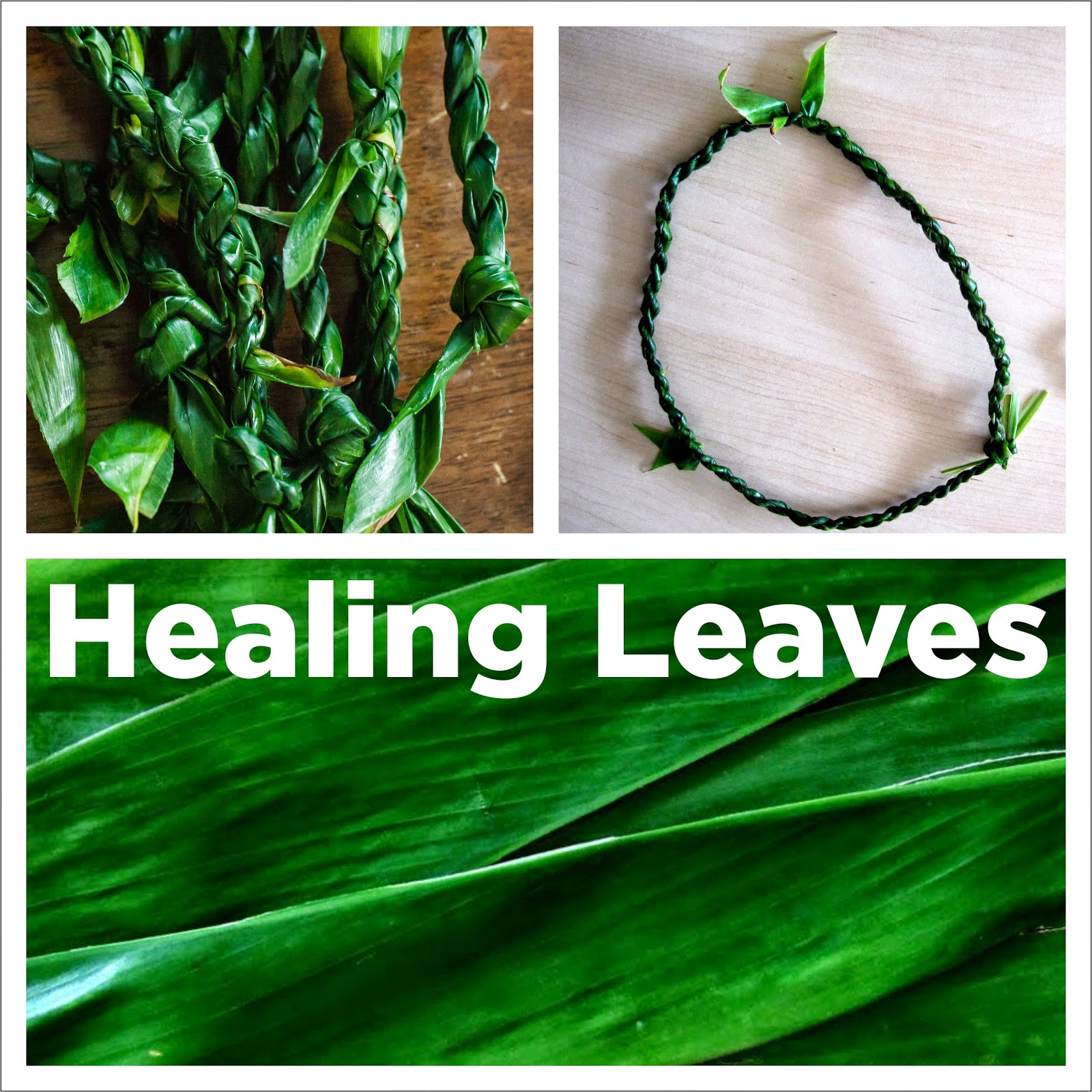 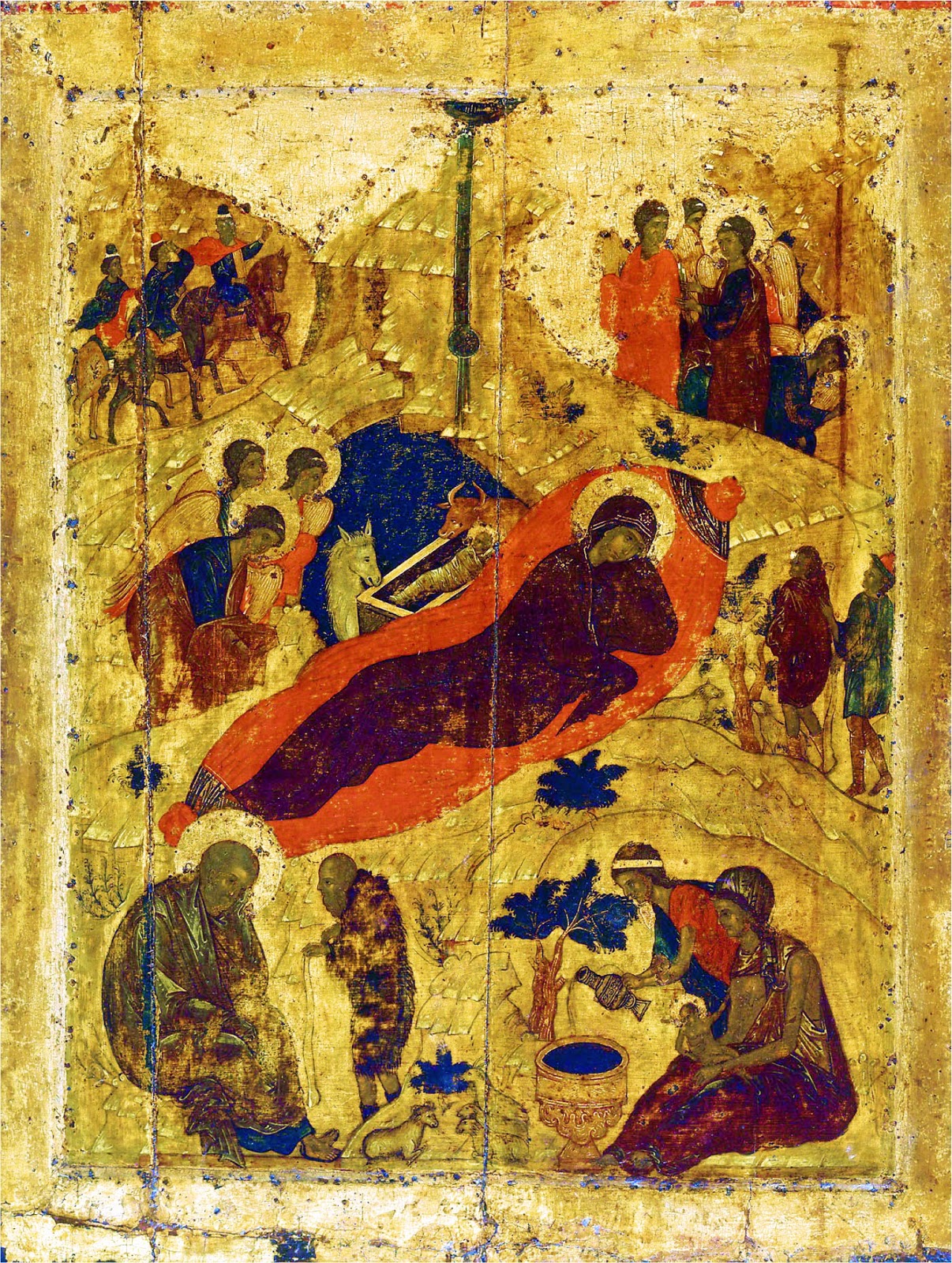 This year as our Advent and Christmas art I picked an orthodox medieval icon painted sometimes around 1405 by a famous Russian iconographer Andrei Rublev. It is an excellent example of early Christian didactical iconography.
In the center is a newborn Jesus in a cave with Mary reclining on a royal divan and looking away. Theological reference brings in an ox and a donkey from Isaiah 1 thus highlighting presence, wisdom and devotion of animals. Theological consideration also makes the trough to look like a casket and swaddling cloths to resemble a shroud thus already foreshadowing another cave story of the Easter message. Cosmic significance is highlighted by a star’s long ray which points to baby Jesus. Nearby grows a tree or bush - a royal stump of Jesse which is springing out (Isaiah 11).
All four corners also have their traditional content and meaning. Lower corners are inspired by non-biblical early Christian legends - left lower corner is occupied by Joseph who is tempted by a devil, visualizing our constant human inner dialogue with doubt and unbelief. The right lower corner depicts two midwives (Zebel and Salome) preparing a bath for baby Jesus, thus underlying true bodily incarnation which included a baby bath. The upper corners are reserved for canonical gospels: Matthew’s corner has arriving magi while Luke’s corner shows angelic choirs bringing good tidings to shepherds. The countryside on the background is intentionally barren in order to highlight our human state, a life in an inhospitable world after we lost the verdant Paradise.
Isn’t it interesting how little has changed over the centuries? These icons are like a window into our human perception of Christmas: oddly arranged theology and legends, naivete and sincere spiritual reflections. This one old masterpiece is just like that, it is loaded with meanings and theological lessons cobbled together, and yet it remains light, delicate, almost ethereal and certainly spiritually mesmerizing. Enjoy!

P.S. And of course, Orthodox Christmas are celebrated  according to Julian calendar ;-)
1 comment:

I grew up on a psychiatric ward. My father is a psychiatrist and my mom was a psychiatric nurse. One of my earliest slivers of memory has me sitting under an elevated examination bed in my father’s office and banging all around with a neurological hammer. Later in my school years, I regularly passed through the waiting room. I still remember the diverse, sometime bizarre and always copious selection of characters seeking help in my father’s office. Alcohol and substance addicts, a depressed teacher, a manic storekeeper, a schizoid long-haired savior, parents with an autistic son, children with a disoriented grandma in early stages of dementia ...
It hurts me greatly, especially with the beginning of winter, when I see a similar assortment of people around NYC streets staying homeless or almost homeless. Why is it that so many mentally ill people in our society end up on the streets (or even worse - in jails)? I know they can be treated more humanely and with respect.
When I was a minister in Prague, in the same district with my church there was one of the largest Psychiatric Sanatoriums in the country. It was founded in 1909 under the Habsburg Monarchy! It had a large chapel (in fact a sizable church, really) in the middle of the campus. A small clergy group took turns in leading worship. This hospital had not only an ecumenical church, it also had greenhouses and a horse farm for work therapy, a theater and several art studios, an symphonic orchestra and a jazz band and a calendar of concerts and events... Only two pavilions, to my best knowledge, out of about fifty (on its 160 acres campus) were so-called closed (to keep and protect the patients); all other pavilions were open and patients stayed voluntarily.
When it starts to snow or it is freezing cold and I splash through NYC's slush passing by another disoriented or delusional homeless soul, it hurts me so much because I know there are better alternatives. If the Habsburg monarchy, a full century ago, was able to care for its mentally ill citizens, why isn’t our technologically and medically advanced society? It is important to talk about it, it is important to demand from our government a better, more humane, more enlightened approach to mental illness (at least on the level of 1909!). And very practically it is important for us at Rutgers to continue supporting and to celebrate WSFSSH (West Side Federation for Senior and Supportive Housing). In our community it substitutes for and fills in the gaps of our negligent and inadequate government.
This Sunday we will talk about and pray for social refugees and exiles- people pushed away from their homes because of their mental illness or difficult and complex family circumstances.
No comments:

The Bible is a surprisingly earthy book. It is full of unheroic heroes with important lessons to teach. It presents life in its raw and un-adorned nature. In this very essence, the Bible resists being made into some simple-to-follow set of rules and doctrines. And this un-tamed nature is the Bible’s greatest value. Take for instance such shocking behaviour as biblical patriarchs pimping their wives. I know many would object to the use of this verb, but that is exactly what we are told they were doing - presenting their spouses as their sisters and offering them to potentates for personal benefit. Just check Genesis 12, Genesis 20 and Genesis 26!
Threefold recidivism especially unsettled many pious souls as well as theologians and interpreters. Many tried to rationalize these surprising stories. Fundamentalists, unable to defend patriarchal actions, attempted to exonerate them at least from lying - their wives were indeed their blood relatives! Religionists (students of religions) might point out that these stories are some kind of myths reworked into patriarchal legends. As represented on number of Egyptian stelae. Folklorists attempted to reduce the count of stories by seeing them all coming from one original oral tradition. Dogmatists highlighted moral lessons: learning to trust God, and the dangerous short-sightedness of human schemes. Anthropologists suspected some ancient practice of sharing wives with strangers, (well documented in other cultures.) Feminists saw it as a literary device highlighting the stellar beauty of the vulnerable matriarchs while denouncing the callous values of patriarchal system. To a different degree all these observations offer important and relevant insights.
For me these stories reflect the deepest visceral fears of many refugees, migrants and other marginalized groups in our society. In a foreign culture, in a foreign land, confronted with strange customs, an exposed minority, unprotected and vulnerable, ... in such a situation even deep seated taboos can collapse. Our own Biblical patriarchs help us to understand these dangerous dynamics of alienation and fear. Our own Biblical patriarchs show us why it is important to protect all the vulnerable strangers above and beyond the protection which is enjoyed by the natives. The Bible is surprisingly earthy, practical and radical book. This Sunday we will pray for economic refugees.
Our guest this Sunday - Rick Ufford-Chase, Moderator of the 216th General Assembly and Human Rights Activist will share with us his first hand experiences around and on both sides of the US-Mexican border.
No comments: