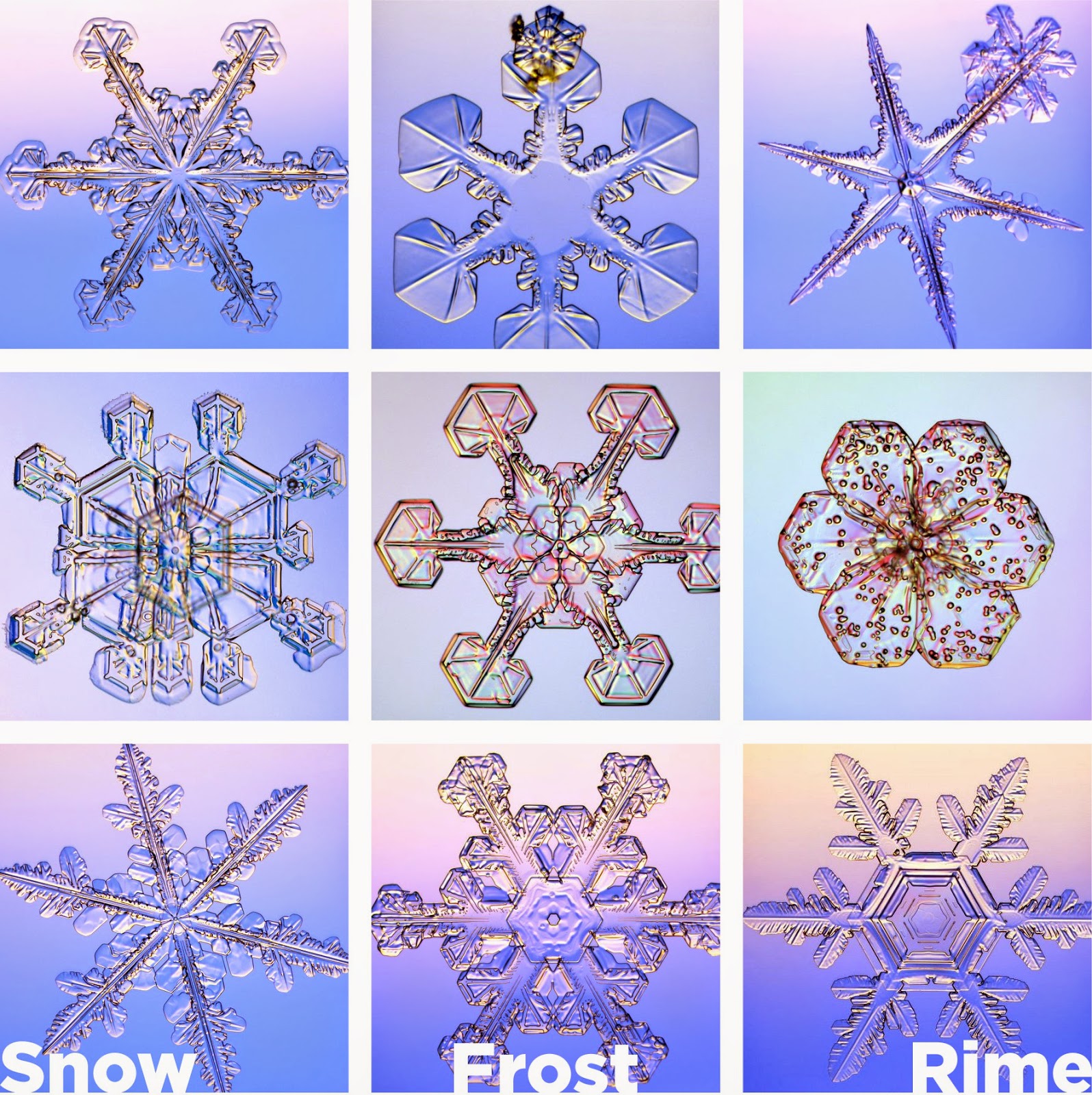 Have you ever looked at a snowflake? I mean really, really close! If you have, you have probably noticed that they are like marvelous exquisitely beautiful miniature gems! Snowflakes are indeed like gems because they are crystals, water crystals with a hexagonal structure. What is even more astonishing is the fact that every single flake is absolutely unique!
It was a farmer from Jericho, Vermont who helped to demonstrate this. Wilson “Snowflake” Bentley (1865-1931) spent his winters photographing guess what -- single snowflakes! With his bellows camera, glass plates and macro lenses he took pictures of more than five thousand individual snowflakes. Each and everyone was unique! Other snow experts continued in his legacy. They are unanimous: among all the snowflakes not a single pair has ever been seen which were exactly the same.
Shapes of snowflakes are influenced by the rules of physics, especially crystallization. They are shaped by the momentary temperature, dew point, wind, humidity, and also by pure chance present in the cosmic rays triggering the crystallization nuclei. As a result, every single snowflake is a uniquely beautiful and tender crystal of ice.
Anytime I see snowflakes gently descend from heaven in their multitudes, driven by a strong blizzard or sparkle in the air gently flaking from heavens, I cannot stop marveling over their miraculous overwhelming beauty. I am mystified and perplexed over the superfluous diversity of their nature. Snowflakes are like the rest of creation – unique, gentle, perfect in their unrepeated and unrepeatable shapes and forms. They come in billions and zillions and fill the air and earth with their white, gentle unending excessive plurality and diversity.
I might know the physical explanation of their formation, yet I rejoice over this auspicious phenomenon of extravagant multiplicity and diversity and sing with Psalmist:

Hallelujah!
How good it is to sing praises to our God;
for the LORD is gracious,
and a song of praise is fitting.
...God gives snow like fleece,
scatters hoarfrost like ashes.
God sends rime like breadcrumbs,
who can endure God’s icy cold?
Soon at the divine command - all it melts,
God breathes - and water flows again.
Hallelujah!

Join us this Sunday allowing snow, hoar and rime to teach, inform and inspire our faith.

And for those who read this far: there is a unique claim that two identical ice crystals were discovered in 1988 by Nancy Knight from National Center for Atmospheric Research. She found in high clouds above Wisconsin two identical thick columnar tubular ice crystals.

But first of all, these are very specific kinds of ice crystals - many people would have difficulties calling them snowflakes. But more importantly if you look at the picture they actually have minute differences in their structure as well as on their surface. I would claim they are very similar but not identical.

If we want to understand the radical nature of some biblical passages, it is often quite informative to flip them upside-down. Inspired by Erasmus of Rotterdam and his “Praise of Folly” we did it this Sunday with Jesus’ beatitudes (Matthew 5).


It is not surprising that Erasmus of Rotterdam (as diligent editor of ancient texts as he was) gave us not only the first early modern edition of the Greek New Testament but also this new fragment from the Manhattan Gospel of Henry Rutgers.

Here is a joke from a long ago:
A man was reported to have said in a pub: “Milos is an incompetent imbecile!” At the police station he attempted to defend himself: “No, comrade officer, I did not mean our respected party chairman, but some other Milos!”
“Just don’t try this on me! Did you say ‘incompetent imbecile’? You certainly meant our party leader!”
(Miloš Jakeš was the last totalitarian Communist Party Leader in my homeland and known for dull mind and strange guffs.)
I know that this joke has been around for quite a while and was told about a number of different politicians and with slightly different insinuations, but it so nicely captures the reality of totalitarian regimes.
I grew up under the totalitarian regime of Eastern Block Communism. Humor, satire, jokes, parody, irreverence... these were our best tools to preserve sanity under the absurd and often brutal ideological regime. And the regime perceived even the smallest jokes as acts of ideological sabotage and suppressed them accordingly, that meant with violence. People literally went to prisons for sharing jokes. My aunt’s academic and professional life was seriously jeopardized because of an alleged college prank with political overtones.
Humor is an important, vital tool of a healthy personal and societal life. I know that there are irreverent, offensive, off-color and utterly distasteful jokes. Yet, if there are any institutions, realities or persons who are a priori off the limits for humor or jokes, I insist, it is an indication of a major problem. And this applies also to the realm of religion. Humor, satire, jokes and general irreverence are vital tools of a healthy faith.
A religion which takes itself too seriously so that it cannot stand humor has a serious problem. The Bible itself is full of puns, jokes and satire! If anything becomes beyond criticism or satire than we know we are dealing with an arrogant idolatry! I find the maxim of Gideon’s father Joash very appealing. It would go something like this: If this or that deity was so grievously offended and hurt (by irreverent acts), let that deity punish the perpetrator, not the deity’s followers! And you can indeed find this radical principle in the Bible (Judges 6:31).
In year 1511 Erasmus of Rotterdam published his satirical essay The Praise of Folly. This preeminent scholar of renaissance humanism adopted for himself the well-defined role of court jester to poke fun at superstitious, dim-witted medieval Christianity. Erasmus in the form of personified Folly took the pulpit and made a hilarious and simultaneously serious presentation. Here is just a short paragraph of Folly’s peroration:
And I was recently present myself (as I often am - {mind you Folly is speaking O.S.}) at a theological debate where someone asked what authority there was in Scriptures for ordering heretics to be burned instead of refuted in argument. A grim old man, whose self-importance made it clear he was a theologian, answered in some irritation that the apostle Paul had laid down this rule saying “A man who is a heretic, after the first and second admonition, reject [devita]”,and he went on thundering out this quotation again and again while most of those present wondered what had happened to him. At last he explained that the heretic was to be removed from life [de vita]. Some laughed, though there were plenty of others who found this explanation worthy of a true theologian. When several still expressed some objections, he declared with irrefutable authority: “Pay attention. It is written that thou shalt not let the evildoer live. Every heretic is an evildoer, therefore, etc.” The entire audience marveled at the man’s reasoning power ...
Actually, it is not funny that it remains funny even five hundred years later. I certainly met such “theologians” who were using similar syllogistic arguments. Some aggressors still use religion to justify their blood-thirst, and our politicians, not that long ago, referred to evildoers with similar grizzly intentions, don't you remember GWB? You see, humour is serious stuff and no laughing matter! ;-) 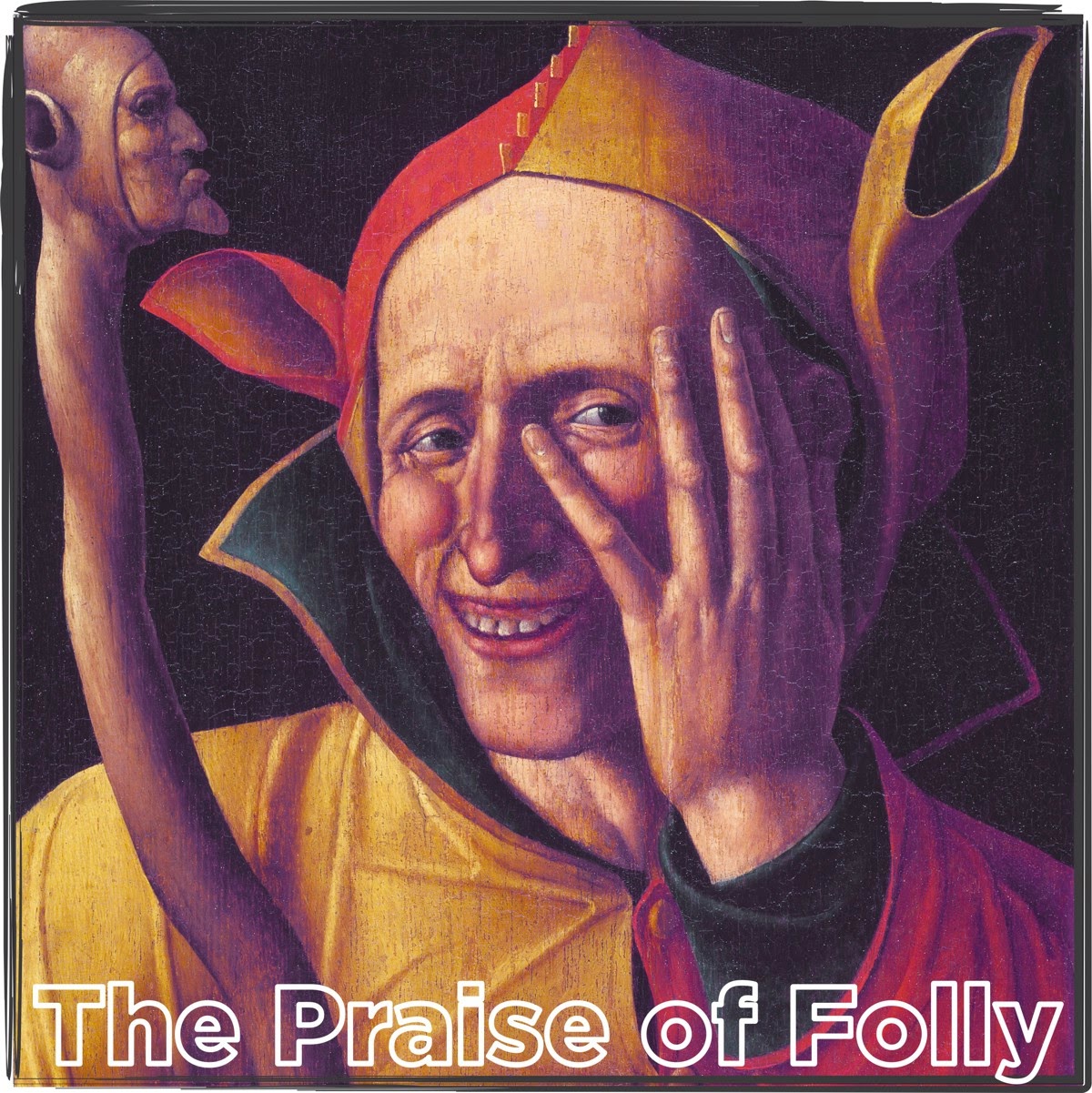 Why have I appeared today in this unaccustomed garb? Well, you shall hear the reason if you have no objection to lending me your ears - no, not the ones you use for preachers of sermons, but the ears you usually prick up for mountebanks, clowns, and fools, the sort of ears that once upon a time our friend Midas listened with to Pan.
No comments:

In the darkest corner of the Rutgers Exegetical Archive Library (REAL), residing in the pulpit pedestal, we recently made another interesting discovery which seems to be a yet unknown fragment of the first American Biblical Detective Story. Although the exact original meaning and context of this fragment remains uncertain, and although its genre does not fit any known ancient forms, we would tentatively include it, at least for now, with other documents of Manhattan Gospel of Henry Rutgers.
(Some earlier discoveries of  Manhattan Gospel of Henry Rutgers were reported here, here, here, here and here)

“Matthew, did you really need to kill all those innocent babies in Bethlehem?”
“But I did not do it! Herod did.”
“Just don’t try this on me, Matthew! We both know very well that you had made up that whole story about the visiting Magi and about the escape to Egypt. It starts as sublime, inspiring fiction, but then it turns ugly - so much blood and weeping! Was it really necessary to have all those babies murdered?”
“What else should I do? I could use only few lines of text to set a stage and to show my readers how violent was the world into which Jesus was born. Herod was a natural choice. He was a nasty character, as you certainly know, a paranoid power-possessed tyrant able to kill his own sons. Would you know any better contemporary villain?”
“I am with you on Herod, but my issue is with your treatment of those babies. As an author of that story, you could save them in just few words, with a stroke of pen! You wrote in an angel to warn and save Jesus. Would it be that difficult to write in few more angels to stop the soldiers or at least to warn other parents in Bethlehem?”
“Just think about it! If I had introduced even a few more angels to stop those cutthroats, it would immediately made my story into a feeble-minded fable. Would you, yourself, believe it? Have you ever seen a host of angels flying in to intercept crooks?”
“I see your point. It would be quite unrealistic!”
“I am telling you, my story, as legendary as it is, is unfortunately like the weekly news. The story is not the problem, our world is! There are clearly too few angels!”
“But why? Shall we go and search for some?”