According to the gospels, Jesus entered Jerusalem riding on a donkey. (Mark 11:1-11, Matthew 21:1-9, Luke 19: 28-40 even John 12:12-15). As overwhelmingly confirmed as it looks, it is difficult to know whether it really happened. All the gospels are mutually connected and at least in their current form are shaped as traditional "fulfillment narrative" fulfilling an ancient prophecy. Matthew and John even quote (each in slightly different words) that prophecy (Zachariah 9:9). Matthew then goes still further by talking about two animals, she-donkey and her colt. While in Zachariah two, even three animals are a part of the Semitic poetical style (poetical parallelism), Matthew makes two animals part of his story. (Literalistic/fundamentalistic tendencies together with misunderstanding of the Semitic poetic style among Christians are clearly of a very early date! :-) )
Interestingly, the prophecy of Zachariah is not the oldest preserved parallel to the Gospel story. The oldest known parallel is preserved on the cuneiform tablet from Ugarit. (KTU 1.4.iv.1-15). Goddess Asherah is departing for a visit to her partner and the head of the Pantheon, god El. Her assistant/s are summoned and then he/they saddle a donkey for her.
And the Great Lady-who-Tramples-Sea replied:
‘Listen, O Qadesh and Amurru,
O fisherman of the Great Lady-who-Tramples-Sea!
Harness an ass,
saddle a donkey,
put on trappings of silver,
and golden fitments.
Prepare the harness of my she-ass!’

And  Qadesh and Amurru obeyed.
He prepared an ass,
he saddled a donkey.
He put on trappings of silver,
and golden fitments.
He prepared the harness of her she-ass.

Qadesh and Amurru took her,
he helped Athirat on the back of the ass,
into the most comfortable saddle on the donkey.

Qadesh took a torch,
Amurru was like a start in front.
While Virgin Anat and Baal
departed to the heights of Saphon,
Athirat indeed set her face towards El,
towards the source of the (four world) rivers,
in between the springs of  Two Deeps ....

It is epic poetry, so again, we have here plurality of animals, a donkey, an ass, her she-ass. But we have here also the fitting and saddling of the animal. And finally, just like in the gospel of Luke, there is also lifting up and seating of the rider.
It goes without mentioning that Evangelists definitely did not know Ugaritic texts. They are more than 12 centuries older. But all four canonical Gospels, prophecy of Zachariah as well as polytheistic myth from Ugarit clearly show that among the West Semitic peoples: a) donkeys were traditional divine and royal riding animals and b) preparing, saddling of the animal and even c) lifting up and seating of the rider were integral parts of a royal protocol/ritual.
The Gospel accounts of Jesus’ entry to Jerusalem might look like a piece of a bucolic idyll but in reality this story reflect an ancient royal ritual with deep religious and political roots predating the gospels by many centuries.
And that is something you might not known about the Bible.

For love of the Universe 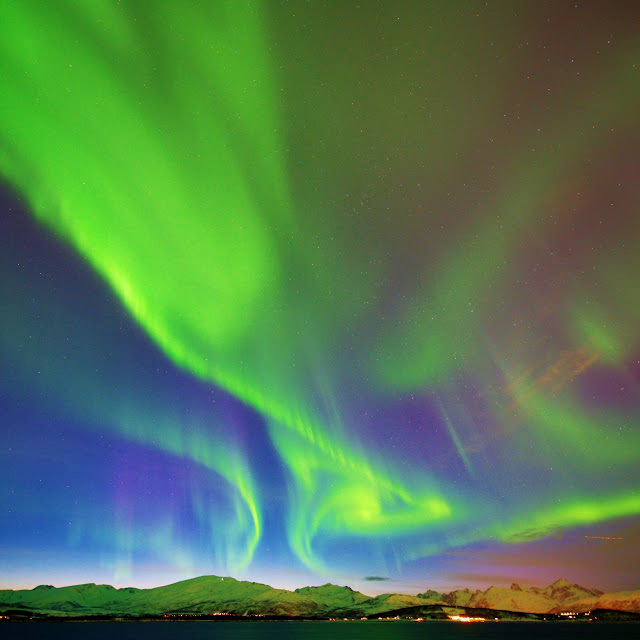 Three weeks ago I spent with Martina few days in Tromsø (It was her anniversary wish). Tromssø is a Norvegian city way above the Polar Circle right in the “Auroral zone” – this is a geographic belt around the poles which is excellent for observing Auroras (Northern Lights). That was our goal - to see Aurora Borealis. During shorter days temperatures stayed around single digits (Fahrenheit) and overnight they were dipping deep into the minus territory (cold waters of a fjord were steaming like a boiling pot).
We spent nights outside hunting and observing this awesome celestial spectacle. Streams and curtains of light are flowing and swirling across the wide expanses of sky from one horizon to another. This marvelous display was often as bright as street lights, illuminating Norwegian fjords, mountains and peaks with its predominant bright green light.
Aurora received its name from the name of the Latin goddess of the dawn. As if the ancients knew about its close association with our Sun. Polar lights are caused by particles of solar wind which are deflected and captured in the high atmosphere (High Mesospher and low Thermosphere). Northern lights are in fact a spectacular sideshow by which our planet is protecting and keeping all of us, terrestrials, alive.
While I was preparing for this trip, I refreshed my high school education and perhaps learned a little bit more about the Northern lights. Understanding them was great, but direct experience was awe inspiring.  And theologically (in thinking of faith) this combination of beauty and protection revealed to me a prime example of the divine love of the Universe.  It will be our theme this Sunday - reclaiming the famous John 3:16 from the clutches of evangelicals and fundamentalists and highlighting its beautiful message of inclusive divine love.
No comments: