The Bible is NOT history

Our Church is located amid theatrical world of the Upper West Side, thus I have for you this allegory from the realm of the muse Thalia.
Take for instance William Shakespeare’s play Julius Caesar. Just suppose that for generations this play was the only source of information about early imperial Rome. For many years there was no problem, because people were not concerned about history and they appreciated Shakespeare for presenting them with valuable psychological and spiritual models.
Then people started to care for history and historical truth and soon discovered inconsistencies and outright anachronisms in this play. Some rejected it, others ridiculed it, some stubbornly insisted on its literal interpretation (by the way according Shakespeare, in another play, my land-locked homeland of Bohemia supposedly lies by the sea!). Finally discoveries in London and Rome set the score right. Roman history began to be studied from Latin sources, and Shakespeare was seen within its Elizabethan context and enjoyed for all its mastery.
This Sunday I want to speak about the same thing in the realm of faith and theology. The last three or four decades have brought about a great expansion in our understanding of the early history of our Judeo-Christian faith. The Biblical patriarchs (as well as matriarchs), the Exodus, the Sinai origins of the Law, even the unified monarchy of David and Solomon cannot be any longer perceived as historical realities as they once were. The Bible and our faith are finally being liberated from the shackles of the ancient past and literalism. And it is a great liberation. We can finally enjoy the Bible and our faith as they were originally intended in its richness, diversity, inconsistence, spiritual mastery and creativity.
This Sunday I want to share with you these exciting developments. Hopefully I will be also able to outline some great and liberating possibilities. There are many important lessons in history; there is even more transformative richness in the Book of books.

And for those who read as far as here two examples of biblical anachronisms.

And one example when traditionalist (and ideologically tainted) interpretation of history and archeology attempted to misrepresent findings - Biblical reading this Sunday will be about these gates. 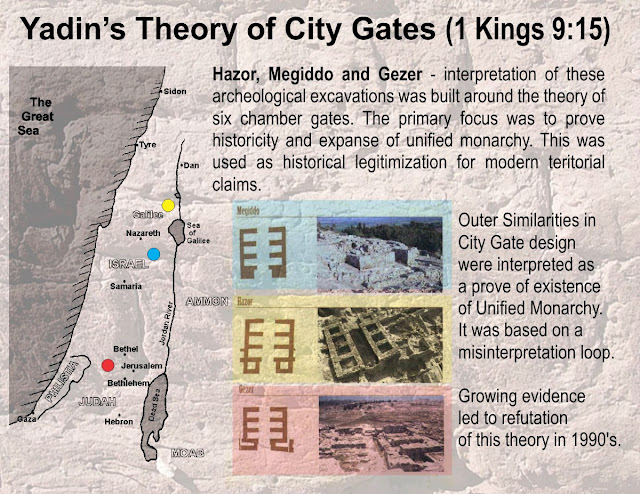 Enjoyed reading over this and some of your past posts this morning. Very informative and well presented. I will look forward to reading more. I hope all is well for you in NYC -we miss you here!

Dear Mark,
So nice to hear from you! I especially miss all of you and also diverse teaching opportunities in Binghamton (University Lyceum, Lay Preachers' Trainings ...)
Hope you are doing well, Barbara Renton and her Prague relative are just visiting with us (I think that you used to be in same lectionary group). Many thanks and all best wishes.
Love and Light
Andrew