The Place of Healing

Do you have your Healing Place?
I do not mean a hospital or any walk-in-clinic.
I mean that special place where you feel calm, solace, connection and perhaps that kind of spiritual awe which is combination of respect and charm. I have several such places - some distant and some just around the corner. One such special place is even called Moku Ola, literally “The Place of Healing.” 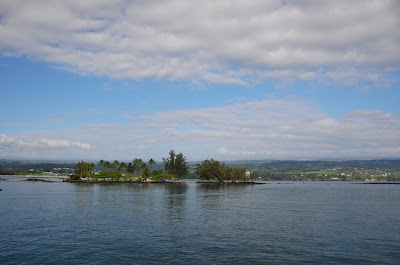 This Moku Ola is an island in the Hilo Bay, a place which was holy already to old Hawaiians. It was their ancient place of refuge, where sins and guilt were redeemed, and well being and harmony found. It was a place connected with a temple, royal fish ponds, surrounded with holy grounds. Unfortunately, in modern times, the fish ponds were turned into a park, the temple was destroyed, paved over and made into a parking lot, and the place of refuge became a popular picnic destination and a playground.
Yet, no matter what modern insensitive people did to this place, it still is Moku Ola - the Healing Place. It is difficult to describe; it might be in its geography, its island nature, the embrace of the shore, the special air and smell, the angle of light and its reflexions, its unique and unbalanced horizon of ocean and mountains. For me this place still retains its special charm, it still is a special place to be and feel the presence of divine.*)
And don’t worry, I am not succumbing to some virulent form of New-Age religiosity. This kind of recognition of such special spiritual places is in fact very Biblical **) and always has been part of our Christian faith tradition***), although it became partially suppressed and partially forgotten in modern times.
This Sunday, the first in the series “Rainbow of Mysteries“, we will attempt to uncover this forgotten and neglected aspect of our faith tradition. We will seek to open our minds, eyes and senses to the Mystery of Presence and God’s Moku Ola the Healing Places in environment around us.


*) Ancient Hawaiians had a special class of priests called kuhikuhi pu‘uone (Literally: Experts in making heaps of sand) to seek appropriate places and to design houses and temples. They were indeed experts because there is hardly a religious place which would not be set in unique location, a place of worship without special atmosphere.
**) We will be talking about Jacob's dream at Beth-El (Genesis 28), but there are many other especially biblical instances of special places where the divine presence was noted and remembered.
***) Many churches, monasteries, or places of pilgrimage were built in significant locations - on hill tops, by river confluences, near powerful springs...