What I am writing to you today might seem to many Americans as distant as the stone age and similarly irrelevant. It is anything but! Read carefully and you will find these themes (when translated into our modern idioms): corruption, abuse of power, buying influence and offices, miscarriage of justice, cruel and unusual punishment, eliminating critics instead of dealing with criticism, twisting Christianity into a power hungry, abusive and profit-making idolatry... Sound familiar? That is why knowledge of history is essential for moral integrity. 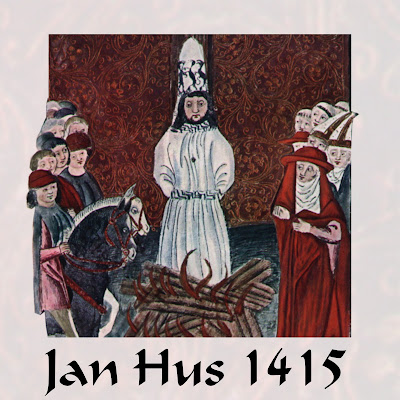 By the morning of July 6, 1415 a large stake (pyre) was built on the bank of the rive Rhine just outside of the city walls of Constance, Germany. All was ready for an execution of yet another heretic, one of hundreds, yes, thousands who shared the same gruesome fate under the brutal reign of the medieval church.
Yet this time it was different; it was different in context and also in the outcome. Jan Hus was a professor of philosophy at Charles University in Prague, where he also served for a term as the university rector. At the same time he was a priest and popular preacher in Prague.
Hus came to Constance to participate in the universal church council which was called to deal with the deep and chronic problems of the medieval church. The most prominent symptom of that crisis were three rival popes (Gregory XII, Benedict XIII and John XXIII) fighting for power. Other symptoms were, for instance, simony (selling and buying church offices for money or favors - church corruption) or selling indulgences (selling divine forgiveness) to finance military campaigns or church offices owning villages and serfs.
Eventually, after substantial politicking and maneuvering before and during the council, the papal schism was solved. With the power struggle resolved, anyone who was pointing to deeper, underlying problems in the church was declared a heretic. Jan Hus and shortly after him his academic colleague Jerome of Prague were burned alive. These executions of course did not solve, but only highlighted, those deep problems in the church - its corruption, its proclivity to violence and its public defiance of the way of Jesus.
Sparks from the stakes in Constance ignited the Czech Reformation preceding by a full century the Reformation of Luther, Zwingli and Calvin. This weekend we celebrate the 600th anniversary of the judicial murder of Jan Hus and the beginning of the Reformation, that striving for a more faithful, serving rather than ruling church, for a more Jesus-like church.

This is of course a great simplification of the whole matter. The events were peppered with bitter scholastic syllogisms and examples of human perverse willfulness. For instance, the medieval Roman Church never really burned heretics. The church office only declared people heretics and handed them over to the secular authority of princes. The result was the same - the heretics were burned. Even John Calvin tried to hide behind this syllogism when he had Miguel Servetus executed by fire for non-Trinitarian teaching.

Beyond the principle bets, there are side bets that fluctuate from one on line casino to a different. The Banker additionally takes another card if the Banker’s hand is more than 5, and is based on what third card the Player attracts. Here the yesbet88 primary digit is dropped and the second digit determines the hand value. For example, a 6 and an 8 equals 14, 1 is dropped and the result's 4. A natural is an automatic winner that occurs when the Player or Banker is dealt a complete of 8 or 9 proper off the bat.