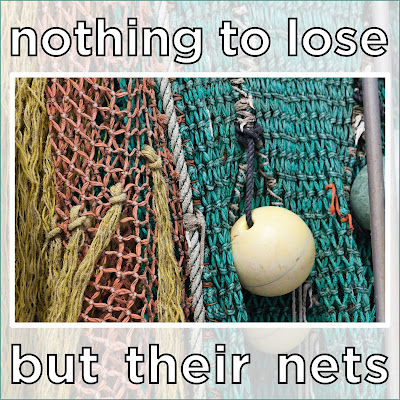 Do you know what GARUM was?
It was a Hellenistic fish sauce. In the Greco-Roman world it was like a soy sauce for Asian cuisine. The only difference being that garum was more an indication of social status. The rich people bought expensive fish sauce imported from distant provinces. While the poor used dreks left from the production of this fish sauce. They flavored their porridge with a paste of crushed fermented salted fish.
Catching fish for the production of garum and slated or pickled fish was the occupation of the first disciples of Jesus. They were industrial fishermen. From ancient history* and archeology** we know they were hardly making ends meet and they were exploited. They paid their regular temple and imperial taxes. But as fishermen, they also needed to buy fishing licenses, they had to pay for use of the harbour (or just for docking or landing) and they had to pay tolls for bringing their catch to market.
At the end, they had hardly enough to stay alive. They were catching fish which they had to sell (and could not eat), so that the rich could enjoy fermented pleasures. They must have felt like a little fish trapped in a large and unjust exploitation net of fees, tolls and taxes. Are we surprised that many of them were ready to leave behind the tools of their exploitation and follow Jesus joining his reform movement?
That is how Galilean fishermen heard the call to unite with nothing to lose but their nets in which they themselves felt ensnared (To paraphrase one well-known German philosopher).
Let us rejoice this Sunday in leaving behind umami business to capture the true fresh and just zest of life.
--------------------------------------------
* For instance the Galilean town Magdala was also know in Greek as Tarichae - which literally means "a place for processing (salting and fermenting) fish". Or for instance a biblical scholar, K.C.Hanson, reconstructed from different ancient sources a complex Galilean fishing economy.
** I wrote about a discovery of the Galilean fishing boat in one of my earlier blog posts.

And for the curious or knowledgeable a quiz question with a small reward -- Would you know who was that "Well-known German philosopher" and what would be his wording of that quotation Fishermen unite, you have nothing to lose but your nets? Write me by email or talk to me after worship.

All of them come from a few of the the} trade's prime software 정카지노 providers, together with KA-Gaming and Reevo. It's limitless, and can be used anytime you're topping up your account. They are recognized to change and improve their welcome promo often, so certain to|make certain to|remember to} check out at|try} this hyperlink for the newest obtainable bonuses. Next up is Red Dog, a relatively new casino that’s excellent for bonus hunters. The assist center and Ignition's boards present you with|provides you with} what you need for most simple points, however for anything more complicated there's also 24/7 reside chat service, and an e-mail program that goals to respond within 72 hours.