You probably know the infamous story of the golden calf. When Moses was up on the mountain, Israelites beneath the mountain created for themselves out of their gold an idol, a statue of a bull (Exo 32). And shortly afterwards they were seriously reprimanded and punished for it. It is so deeply rooted in our culture that in western languages the golden calf became synonymous with false gods, for false religion, for idolatry.
But reality might not be that simple and straightforward because we know that in the old parts of the Hebrew Bible God, YAHWEH, is actually linked with bovine imagery. One ancient divine title, which is often translated as “The Mighty One of Jakob/Israel” (for instance Gen 49:24 or Psalm 132) originally meant and can be more precisely translated as “The Bull of Jakob/Israel”.
There are also a few passages which speak about God’s horn or horns (Hab 3:4). Even Moses when he returned from the final meeting with the LORD a few chapters later (Exo 34) - there is a very strange passage -- Moses returned and on his head were horns, so that he had to veil his face not to scare people. (But don’t look for it in the most modern translations - they absolutely unplausibly translate that Moses’ face was shining and that is why he wailed himself. But in reality in the Hebrew text it is clear - Moses grew HORNS.
There was evidently a time when the bovine imagery was acceptable even as an honorific attribute for the biblical God. So what happened that the image of bull was abandoned? Why did the bovine imagery and theology become cursed? Why did it become a synonym for idolatry and blasphemy?
Clearly bulls, calves and cows are innocent, it is not their shape or their nature. Biblical story is deeper and more serious for us today. Here is a spoiler - real cows have nothing to do with our idolatry. They are lovely, curious, intelligent and as our Hindu neighbors would say, they are holy animals. If anything is connected with our idolatry then it is what we project into the cows and how we portray them. In our own otherwise very urban city a cow on a sidewalk (actually a statue of a charging bull) is a quintessential example of our proclivity towards worshiping ourselves, our vaingloriousness, our individual and collective delusion of grandeur and power.
Come this Sunday as we learn from the bible to love and respect cows and avoid Idolatry and dangerous false religions of our own days. 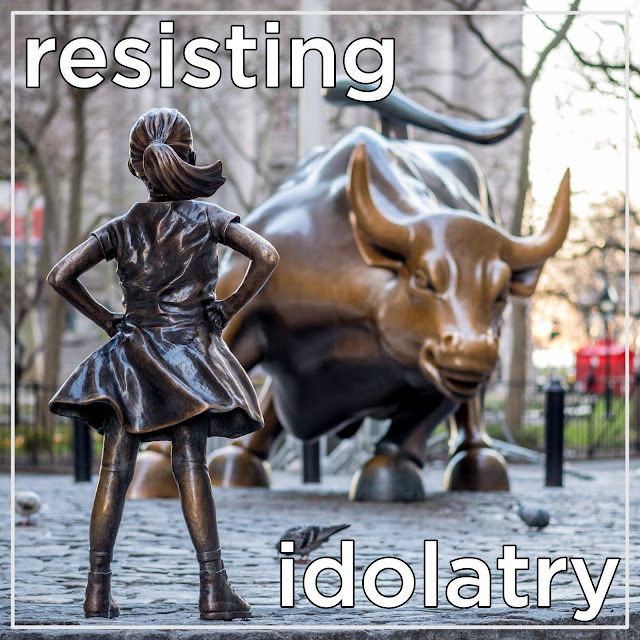