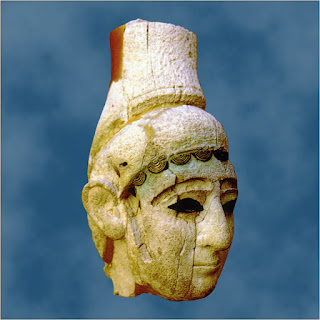 Among religious texts from Ugarit is also a beautiful and deeply meaningful liturgy of communal penitence. It is a Canaanite, pagan, Late bronze version of Yom Kippur now known refered to as KTU 1.40. Thus this liturgy is more than three thousand years old and easily predates anything we have in the Bible by hundreds of years.

In that liturgy, sons of Ugarit, citizens and resident aliens, government, including the vizier, and the king beg forgiveness from a long list of social, national, and ethnic groups. They beg forgiveness for whatever might compromise their integrity in relationships with the Qatians, the Dadmians, the Churians, the Hettites, the Cypriots, the Hebrews, all the subjects, all the poor, all the refugees, by their anger, impatience, any transgression, for any missteps in sacrifices or dues. (Some of it is conjecture, but the intention of this liturgy is clear.)

And these petitions by men are followed word-for-word in an almost absolute parity by petitions from daughters of Ugarit, including the Queen and her court.

The clay tablet with this liturgy is unfortunately broken and badly damaged, but these petitions were clearly repeated a number of times with different sacrifices. From what we can guess, at least three times for sons of Ugarit and three times for daughters of Ugarit.

I find this bronze age liturgy moving and deeply meaningful. Just imagine in our own times that instead of the self-congratulatory and boastful State of the Union Address we would have this tradition of an annual national holy day of repentance in which the president, all the secretaries, all the dignitaries and supreme court justices would come together and lead the nation in repentance doing nothing but humbly asking all the poor, the homeless, the immigrants, all the racial, national, cultural or gender minorities, all the international partners and enemies, expressing sadness and asking for forgiveness! Not once, not twice but six times and possibly the seventh time for good measure. And afterwards they would personally serve the people a lavish meal paid from their own pockets.

These are the ancient pagan roots of the biblical day of Atonement, and the Jewish Yom Kippur until today. And quite likely something you might not know about the Bible and the biblical roots and background.

Join us this Sunday - we will talk about atonement and what the medieval church and after them the fundamentalists until now did and still are doing to the concept of repentance by developing atrocious dogma of substitutionary atonement. We will reject this harmful and blasphemous dogma and will seek more hopeful and healthier alternatives.