Turning the world upside down

I have been always intrigued by the magical plasticity of our perception and how it alters our understanding of the world and informs and broadens our decision making. Take for instance the famous upside-down perception experiments. Neuroscietists fitted people with semi-permanent goggles which turned their vision upside down. Understandably, first several days were almost unsurvivable for everyone. On the fourth and later days participants started to cope and soon they lived almost as if they did not wear these perception altering glasses, they were even able to ride a bicycle for instance. When they took the glasses off again, their perception returned instantly or soon.
As I am writing this article, we are returning from summer holidays in Dominica, an island member of the British Commonwealth. It is an almost dizzying experience to drive on the left side of the road. It vividly reminded me of my seminary year in Scotland. Driving on an opposite side of the road is difficult, strangely, being a pedestrian, is not much better. For a day or two I did not know where to look first. Many times over I was surprised by honking and occasional squeaking of the brakes coming at me from strange and “wrong” directions. After about two days it got better.
Our view of the world, our inner image of the world and our position in it is result of our psychological and cultural influences and viewpoints. For instance, do you know, how Australians view the world? It isn’t upside down, but it isn’t so much different. Just look at Australian maps! I had a very early introduction to the Australian world view because my first English teacher had some Australian friends.
In her classes she liked to use some nicely printed travel magazines from “down under.” These magazines also included world maps with an “Australian spin”. These world maps were not drawn around the Atlantic basin – to the contrary - in them the Atlantic laid on the edges of the world and the Pacific basin and Australia were at the center, or very close to it (actually the 150th meridian was the center line. It looked something like this: 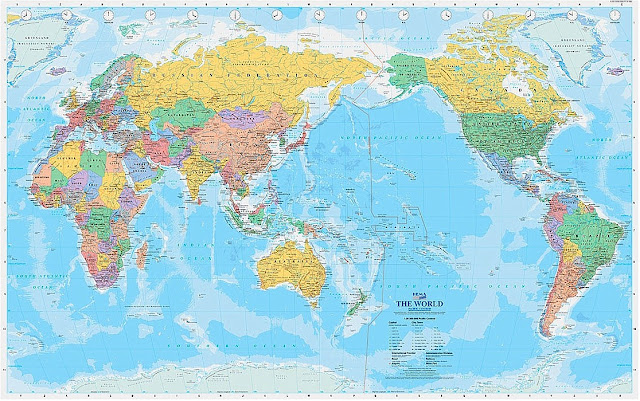 Thus in the third or fourth grade I learned to appreciate the fact, that the image of the world is a reflection of our cultural and psychological predispositions, and our cultural and educational influences. Australians do what we all do - view ourselves in the center of the world.
Unfortunately many people are mentally lazy, and thus are not conscious of this fact. In addition, their world can be quite small, even in one of the largest metropolises of our planet. Mental images of the world for many people are built around their persons and don’t reach beyond their longest shopping trip.
Thus, looking at the world from different positions and angles can be a healthy mental, cultural and spiritual exercise. As a permanent visual reminder I have in my church office a map which looks something like this: 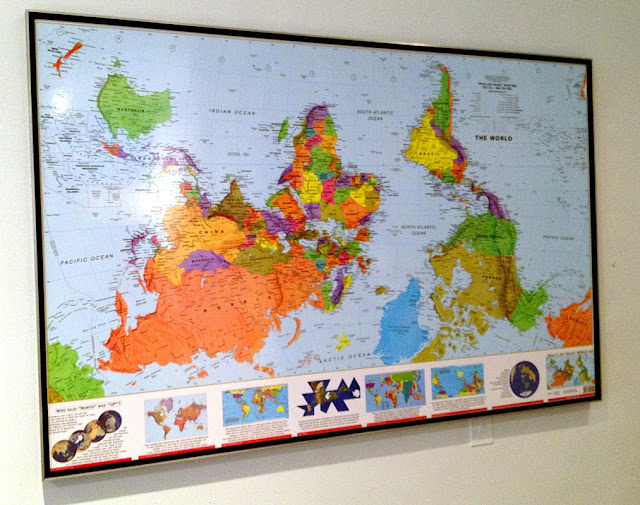 This map is arbitrary like any other cultural convention, yet how profoundly it can change our perspective of the world. Momentarily it can put us out of balance. However, it can help us to realize how much our outlook is a self-centered cultural prejudice. Expanding our personal horizons can lead us to become more humble and open minded, especially when we realize it is not just an intellectual prank, it is a lived reality.
True Christian faith, faith, which is not just another cultural convention or ritual, real faith, deep and unpretentious faith which enjoys and welcomes challenges, is a prime example of life changing and dimensions expanding experience. In the moment when we encounter it, it can give us headaches because it has tendency to turn everything upside down. A first reaction is often rejection or dismissal, but when taken in as a challenge and processed and accepted, this transformative faith has the potential to broaden life and change life perspectives. In our open-minded and progressive faith we go against the stream of our environment (either secular or conservative Christian). We continue turning expectations, conventions and prejudices on their heads and thus continue living our Christian faith openly and honestly.

Where did you buy that map? The one shown in the final photograph? I would love to buy one. :)