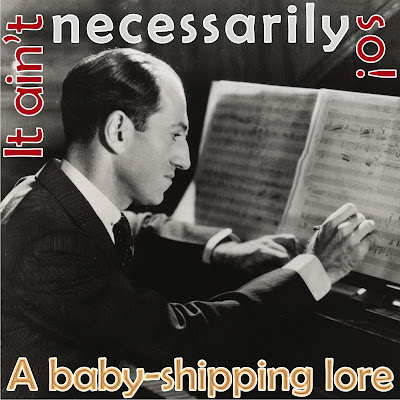 This Sunday we continue our Gershwin series based on the song “It Ain’t Necessarily So!”
Of course Gershwin was fully justified in having his doubts about “Li'l Moses being fished by Ol' Pharaoh's daughter from the stream.”
More than a century ago (as soon as the Ashurbanipal Library was published and translated) it was known that there was another story about another new born baby, in another reed basket, also sealed with asphalt, floating in another river, rescued by another royal figure, and it was also about a baby who made it big in his life.
In that story the royal figure wasn’t Ol’ Pharaoh’s daughter, it was a Sumerian official, the river wasn’t Nile, it was the Euphrates, the baby wasn’t Moses, it was King Sargon of Akkad.
You see, in a playful operatic setting, Gershwin was fully justified to have his doubts about the historicity of this story. Of course there were no two baby-laden baskets floating on two major waterways of the ancient world. Without any doubt, both the stories of Sargon as well as that of Moses are ancient legends. But as legends, they are so much more powerful than a mere recounting of history. As history, the event would be done and locked in the past, as a legend it is still powerful, it still conveys to us a glorious as well as challenging message!
This Sunday, at the beginning of another Church and school cycle, quite appropriately, we will take seriously the Exodus story, the story of liberation, which never was and yet always will be! (To paraphrase philosopher Saloustios.) Come to rejoice, celebrate, be liberated from all sorts of slaveries and be challenged, encouraged and empowered to become liberators of others. It is the noblest and most joyous calling of the people of God.

Legend of Sargon of Akkad

Sargon, the mighty king, king of Akkad am I!
My mother was a high priestess, my father I knew not.
His ancestry was among the people of hills.
I come from The City of Saffron, on the banks of the Euphrates,
there my mother, the high priestess,
conceived me, and in secret she bore me.
She set me in a basket of reeds;
with bitumen she sealed my lid.
She cast me on the river which rose not over me.
The river bore me up and carried me to Akki, the Drawer of Water.
Akki, the Drawer of Water, lifted me out as he dipped his ewer.
Akki, the Drawer of Water, took me as his son and brought me up.
Akki, the Drawer of Water, appointed me as his gardener.
While I was a gardener, goddess Ishtar showed me her favor,
and for four and thirty years I have been king.
The black-headed people I ruled and governed
Mighty mountains with chip-axes of bronze I conquered.
The upper ranges I scaled,
The lower ranges I traversed,
The sea and lands three times I circled.
Dilmun my hand captured,
To the great Der I went up,
Kazallu I destroyed
…
Whatever king may come up after me,
let him rule, let him govern, the black-headed people;
let him conquer mighty mountains with chip-axes of bronze,
let him scale the upper ranges,
let him traverse the lower ranges,
let him circle the sea lands three time!
Dilmun let his hand capture,
let him go up to the great Der and…!
From my city Akkad.

Name Sargon translates - "The Legitimate King"
The “The Drawer of Water” - was a high title similar to the Master of Irrigations.
Adapted from translation by E.A.Speiser