The curse of eternity 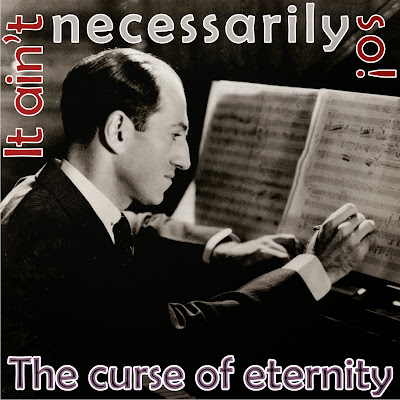 This Sunday is the last in our Gershwin series “It ain’t necessarily so!” And the last verse of the Gershwin song is also the most randy and provocative.
Methus'lah lived nine hundred years, But who calls dat livin', When no gal will give in, To no man what's nine hundred years?
Actually, according to the Bible, Methuselah lived full 969 years! And he was not the only one in the Bible to live more than 900 years: Adam is said to have lived 930 years, Seth presumably lived 918 years, Enosh lived a wimpy 905 years, Kenan only 910 years, Jerad almost matched Methuselah with 962 years, and Noah lived 950 years. And there is no easy rational escape from the logic of these numbers. You cannot simply divide them, say, by 10 - because in such a case the patriarchs would had to have children as young as 6!
Gershwin was fully justified in poking fun at these astronomical life spans. In his time Paleo-anthropology was just cutting its teeth, but people already knew enough to recognize the inverse correlation between the distance in history and the length of human life. The further back we go in time, the shorter and more miserable human (hominid) life gets. Median adult life expectancy (not counting infant mortality) in medieval times was about 40, in Jesus’ time it was about 37, median life span of early stone age farmers was below 30 years, and we know it was not much better before that.
Gershwin was fully justified in making fun of those utterly unrealistic numbers. And his humor, just as all good humor, had also quite a serious side. We strive, largely successfully, to prolong human life. But is the length of life the only measure of its meaning and value? Does not Enoch, the father of Methuselah, have something to tell us. His life is told to be the shortest among the oldest patriarchs (only 365 :), yet he is also the only one blessed and welcomed (approved) by God.
With our modern civilization and its medical achievements don’t we resemble Tithonos, a hero of Classical mythology? His lover, the goddess of dawn, Eos requested and obtained for him the gift of immortality, but she forgot to ask for eternal youth. So after a short and blissful spell, Tithonos now eternally ages, well kept and fed by Eos, yet unable to die, he for ever sinks and shrinks from sight, leaving behind just a sniveling cry.
Gershwin highlights exactly the same theme in the Bible and he leaves us with questions: can’t our striving for eternity actually be a curse? Can’t our striving for longevity be just our collective avoidance maneuver? What actually is the true value and real meaning of life?
Yet again, what seemed to be the most randy and provocative, turned out to be the most seriously relevant. Yet again we can see that “It ain’t necessarily so!”


The story of Eos and Tithonos from the Homeric Hymn to Aphrodite.

Aphrodite tells the story to Anchises:
In much the same way was Tithonos abducted by Eos,
the goddess of the golden embroidery.
He too belonged to your family line,
looking like the immortal ones.
Then she went with a request to the Son of Kronos [Zeus],
him of the dark clouds,
asking that her lover become immortal
and live for all days to come.
Zeus nodded yes to her
and brought to fulfillment the words of her wish.
Too bad that her thinking was disjoined!
The Lady Eos did not notice in her thinking
that she should have asked for eternal youth
and a stripping away of baneful old age.
Well, for a while Tithonos held on to his youth,
enjoying Eos, the one with the gold embroidery,
the one early-born.
He lived at the far reaches of the Ocean,
at the very limits of the earth.
But when the first strands of gray hair appeared,
from his beautiful head and his noble chin,
then the Lady Eos stopped visiting him at his bed.
She still nourished him, with grain and ambrosia.
keeping him in her palace,
and she kept him well dressed.
But when hateful old age was pressing hard on him,
with all its might,
and he couldn’t bend his limbs,
much less lift them up,
then in her resolve she thought up this plan,
a best counsel she could think:
She build him a special chamber,
and closed him behind shining doors.
From there his voice pours out
- it seems in never ending stream -
but he has no strength at all,
that kind he used to have
when his limbs could still move.