(Renewal - Newsletter article)
When this boy Jesus, was five years old, and there came a storm, so he was playing at the wade of a brook collecting the streams of water into small ponds. And then he made that the water was instantly pristine. And understand that he did this with a single word!
He also made himself soft clay out of mud and shaped it into twelve sparrows. And it was on the Sabbath day, when he did this. And many other boys were there who were playing with him. But then a Jew saw what Jesus was doing on the Sabbath day, as he was playing. So he immediately ran off and tells Joseph, his father, “See here, that your boy is at the wade and has taken mud and fashioned twelve birds with it, and so has violated the Sabbath.”
So Joseph went there, and as soon as he spotted him he shouted, “Why are you doing this what’s not permitted on the Sabbath?”
But Jesus simply clapped his hands and shouted to the sparrows, “Be off!” And those sparrows really took off and flew away chirping.
And those Jews seeing it they were amazed, they ran and reported to their elders, what they had seen what Jesus did.
(Text collated from several ancient and modern translations and attempts to capture rather peculiar and folksy Greek original.)

This legendary story about little Jesus is obviously not from the Bible! It is a famous quotation from The Infancy Gospel of Thomas. This non-biblical gospel is rife with primitive anti-judaism and wild interest in sensational miracles. Throughout it Jesus is portrayed as a “wonder-child” a miraculous prodigy with a petulant and subversive streak. These are all signs of late composition and the influences of the popular piety of the late Hellenistic centuries. Infancy stories hardly tell us anything substantial about the historical Jesus and his childhood. On the other hand, they are loaded with important theological themes and they tackle them in their own particular, legendary, fashion.
Their most formative feature is an awe of incarnation, utter amazement at the fact that God became human. How could it be? How would it work? What would it look like? In the gospel of Luke we have an account of a 12-year old divine child in the Temple. Infancy gospels take it even further back. How would this divine child look and behave at his school age, and even before? Their answer is highly entertaining and full of self-serving miracles. But their true answer is hidden in plain sight of their legendary narratives; the fact of incarnation, the theme of Advent and Christmas, that God became human, is beyond means of our intellect, beyond the limited powers of our imagination. The story which we celebrate on Christmas has always been and remains an utter approximation and true miracle of divine love.
And while those early Christians wondered at a divine child, they unknowingly started something very new. For the first time in human history a little child became a main character in a work of literature (Perhaps with the only exemption of the opening section of Xenophon's Cyropaedia). In these infancy gospels the childhood was lifted up from oblivion. Childhood, its playfulness, its mischievousness, its struggles, its creativity, its bursts of energy were given a central stage. Our culture is what it is, our education and our respect and concern and care for children are taken for granted, because people realized that divine incarnation (God becoming human) included 5-year-old Jesus!
Particularly in our highly commercialized times the legendary little Jesus of our story can teach us even something more. Children as well as grownups do not need expensive gadgets and toys to trigger their playfulness. Making ponds on a brook, forming birds from clay. Those are almost proverbial simple joys of childhood which verge on true miracles of sheer imagination and unbounded playfulness. These legends invite us to the simple yet blessed joys of Advent and Christmas time.
This Advent and Christmas we will be following different non-canonical infancy gospel, the one ascribed to James. It is perhaps a little less entertaining than Infancy gospel of Thomas, but no less Mysterious, Miraculous, Mythical and and certainly no less Meaningful. 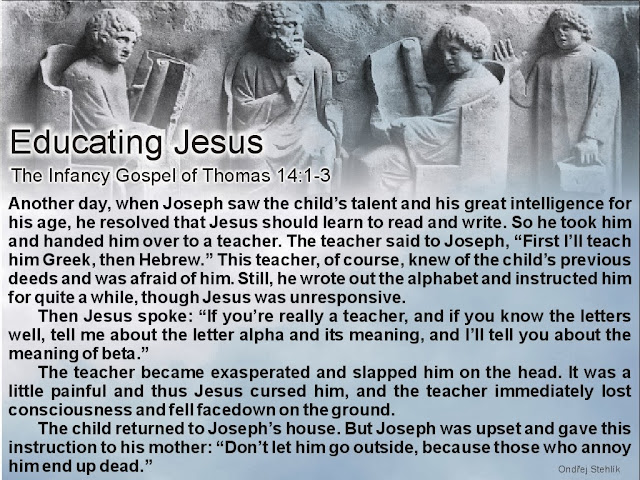