A century ago a young Jewish German intellectual Martin Buber had an introspective  brainwave. He realized that modern philosophy and theology generate alienation. The more we can say about each other or about God, the more lonely we become.
The very act of descriptive speaking and objective observation is putting distance between us and those about whom we speak. He observed that this reality is deeply coded in the essence of our language; “I” relate to “You” differently than “I” relate to “it” or “s/he”. “I – it” relationship is descriptive, objectifying, instrumental even alienating, while “I – You” relationship, at least in its pure form, is direct, eye-to-eye, soul-to-soul. This insight became the foundation of the Buberian pronoun-based dialogical existentialism (And was later worked into the book "I and Thou").
I confess that I have been enchanted and influenced by Buber’s linguistic/philosophical/mystical insights. True relationships are built not by analyzing people, but by speaking heart to heart. Similarly a deep faith does not come from speaking about God, it comes from speaking with God. It all makes perfect sense. But it is also very Euro-centric, based on limited European linguistics.
Take for instance the good news of incarnation presented to us in the Christmas name Emmanuel (God-with-us). Hebrew just like all the main modern Indo-European languages have just one concept of first person plural “we”.  But there are languages with a substantially broader spectrum. Polynesians, for instance, can distinguish between four different forms of “we” - dual (us two) and plural (all of us), exclusive (us without you) and inclusive (us with you).
Such a language would immediately help to sort things out in theology as well as in politics. Imagine hateful political or religious xenophobes showing their true colors by speaking about Emmanuel as ke Akua me mākou “God-with-us-but-not-you” while the angel from the gospel clearly meant ke Akua me kākou “God-with-all-of-us-including-you”!
Buber had marvelous spiritual insight when he formulated his pronoun based existentialism. By going global, by introducing Buber to Polynesians (and vice versa) we can gain even deeper and more profound insight.
---------------------------------------------------------------------------
Addition from 2017-03-01 -- here is a chart of Hawaiian personal pronouns which I recently created for my Hawaiian language class. 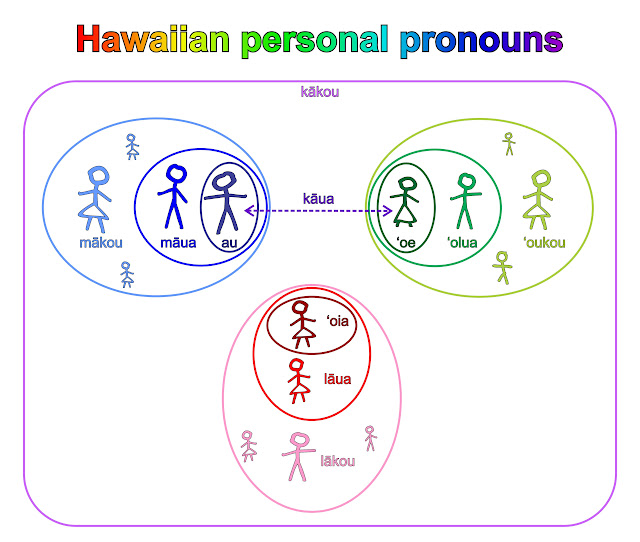