Australians instituted the National Sorry Day on May 26th when they annually ask forgiveness for sins against the Australian aboriginal population. Christians observe Ash Wednesday and Lent - five weeks of self examination. Jewish tradition observes Yom Kippur, a day of Teshuva - repentance and return. I want to take you as far as we can see, to the oldest preserved records of such practices. Among three thousand year old Canaanite Late Bronze cuneiform tablets from Ugarit are two tablets (KTU 1.40 and 1.84) with an interesting and eye opening liturgy for the Day of Atonement.

This section is followed with an almost identical liturgy for the daughters of Ugarit.
(And all the appropriate pronouns throughout this part are also in the female gender.)
Now we present an ox of purification,
purification of the daughters of Ugarit
and atonement for the wives of foreigners
within the walls of Ugarit.
Whatever injured your integrity
as towards the Qatians,
as towards the Dadmians,
...
This was the first round with an offering of two oxen (unfortunately the exact identity of the offering is not certain because the text is damaged; oxen are our best guess). The first round was followed with a verbatim liturgy and litany offering a ram on behalf of the sons of Ugarit and again identical liturgy and litany on behalf of the daughters of Ugarit. And the entire liturgy was repeated one more time with another offering; this time it was most likely a donkey for men and another one for women. At the end of the day all participants certainly knew the litany by heart and there was enough meat to celebrate a community-wide feast.
Now imagine if we took this ancient liturgy and translated it to our times and, say, for our country. In Washington DC, in every state capital, in every county seat even in every town and even village on the designated date and at the designated time all the inhabitants would gather and participate in and recite together a litany offering an apology to the Native Americans and the African Americans, the Hispanics and the Japanese, the Hawaiians and the Filipinos, the Afghans and the Iraqis, all our oppressed and all our homeless, all the victims of police violence and the victims of gun violence, simply all those whom we have knowingly and even unknowingly wronged, all those whom we have directly and indirectly hurt. Imagine in our times if we added the extinct and endangered species, damaged and exploited habitats and environment; eroded soil, poisoned rivers, and polluted air. Now imagine that with this liturgy we would also pledge sacrifices - in our times we would designate sizable budget resources to compensate for our wrongs.

Later, throughout the Bible and Jewish and Christian theological tradition, those Canaanites gained a reputation for being religious, moral and social perverts. But when I read the texts they had written by their own hand I think that their religion and their lives made better sense than what we live in our modern society with our transformed and watered-down days of repentance. Wouldn’t it be marvelous to reintroduce today some modernized version of their liturgy and observances for the Day of Atonement? 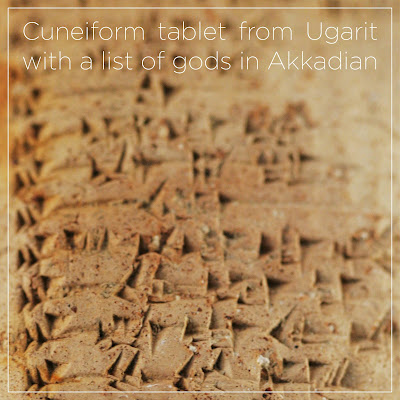