Taxes in the time of Jesus and our times 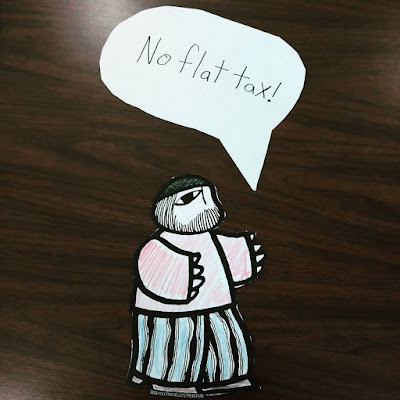 
Read the story of Zacchaeus (Luke 19:1-10)
Jesus entered Jericho and was going through the town and suddenly a man whose name was Zacchaeus made his appearance; he was one of the senior tax collectors and a wealthy man. He kept trying to see which Jesus was, but he was too short and could not see him for the crowd; so he ran ahead and climbed a sycamore tree to catch a glimpse of Jesus who was to pass that way. When Jesus reached the spot he looked up and spoke to him, ‘Zacchaeus, come down. Hurry, because I am to stay at your house today.’ And he hurried down and welcomed him joyfully. They all complained when they saw what was happening. ‘He has gone to stay at a sinner’s house,’ they said. But Zacchaeus stood his ground and said to the Lord, ‘Look, sir, I am going to give half my property to the poor, and if I have cheated anybody I will pay him back four times the amount.’ And Jesus said to him, ‘Today salvation has come to this house, because this man too is a son of Abraham; for the Son of man has come to seek out and save what was lost.’
This is not the only instance when the Gospels are telling us about Jesus interacting with tax collectors.


Now all the tax collectors and sinners were coming near to listen to him. And the Pharisees and the scribes were grumbling and saying, "This fellow welcomes sinners and eats with them." So he told them this parable: (a parable of a lost sheep follows)


Why were tax collectors this widely and deeply despised?


Roman tax collection could be described as a form of franchise. A tax collector “purchased” from a city or a province the right to collect taxes from a certain territory for a certain period of time. State authority received this advanced payment and it was the tax collectors’ responsibility to cover the cost and make profit.


How easy was it to abuse this tax collection system under Roman rule with efficient policing power and few rules to curtail overreach?


Read this short quotation from Philo of Alexandria (Laws 3.159) describing a situation in the early first century:


Recently a certain collector of taxes was appointed in our area. When some of the men who apparently were in arrears because of poverty fled in fear of unbearable punishment, he laid violent hands on their wives, children, parents, and other relatives, beating and trampling and visiting every outrage upon them to get them either betray their fugitive or pay up on his behalf.


How does this contemporary testimony help us understand the Parable of the unforgiving servant?


"The kingdom of heaven may be compared to a king who wished to settle accounts with his slaves. When he began the reckoning, one who owed him ten thousand talents was brought to him; and, as he could not pay, his lord ordered him to be sold, together with his wife and children and all his possessions, and payment to be made. So the slave fell on his knees before him, saying, 'Have patience with me, and I will pay you everything.' And out of pity for him, the lord of that slave released him and forgave him the debt.


But that same slave, as he went out, came upon one of his fellow slaves who owed him a hundred denarii; and seizing him by the throat, he said, 'Pay what you owe.' Then his fellow slave fell down and pleaded with him, 'Have patience with me, and I will pay you.' But he refused; then he went and threw him into prison until he would pay the debt. When his fellow slaves saw what had happened, they were greatly distressed, and they went and reported to their lord all that had taken place. Then his lord summoned him and said to him, 'You wicked slave! I forgave you all that debt because you pleaded with me. Should you not have had mercy on your fellow slave, as I had mercy on you?' And in anger his lord handed him over to be tortured until he would pay his entire debt.


Keep in mind that silver money in rural areas were used exclusively for calculating and collecting taxes and taxes were primary cause of bankruptcies.


Jesus sat down opposite the treasury, and watched the crowd putting money into the treasury. Many rich people put in large sums. A poor widow came and put in two small copper coins, which are worth a penny. Then he called his disciples and said to them, "Truly I tell you, this poor widow has put in more than all those who are contributing to the treasury. For all of them have contributed out of their abundance; but she out of her poverty has put in everything she had, all she had to live on."


How does it change your understanding of this story when you learn that this story actually might be about the compulsory religious tax (an enforceable tithe).


Think about this thought experiment about proportional taxation of 30%


All people paid the same percentage of their income, but is it just? How easily can each one live with this supposedly just proportional tax?


Here is a very basic example of progressive taxation:


The extra 10% paid by person C would actually compensate for 15 persons A not having to pay any taxes.


Based on the gospel story, would Jesus support proportional taxation (all pay the same percentage) or progressive tax (the poor might not pay anything, the middle class their share and the rich a little more)?


"Thinking about Zacchaeus' transformation, where do you see examples of conversions (people, both rich and poor,  getting liberated from unjust systems)?"


"Thinking about the Roman system of taxation, where do you see examples of institutionalized exploitation of the most vulnerable members of society today?"

I learned a lot about socio-economic background of the New Testament and gained fresh insights from professor D. Oakman who has been publishing about Hellenistic economy for decades.

Douglas E. Oakman: Jesus and the Peasants
K.C.Hanson and D.E.Oakman: Palestine in the time of Jesus