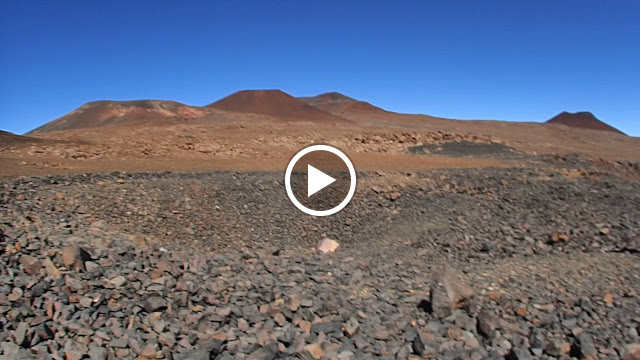 On this video you can see remains after an Ancient Hawaiian industrial operation near the summit of Mauna Kea.
- - -
What has been happening on Mauna Kea has been fascinating for any student of ancient and modern religion. "Protectors of Mauna Kea" can serve as an illustration example of the use of religion for political (nationalistic) ends.
My academic qualification has been in the study of the Ancient Near East bronze age religion (more specifically Ugaritic Mythology). Over the last decade (unable to travel to Syria) I have been studying Hawaiian religion. I visited Hawaii more than a dozen times and even started to learn the Hawaiian language to better understand the cultural and religious mentality.
I have also visited the summit region of Mauna Kea a number of times and I know that there are geologic features closely associated with the Hawaiian deities and religion. To the best of my knowledge there were never any signs of ancient (pre-contact) religious structures in the summit area.
At the same time I know that the mountain was NOT untouchable and ancient Hawaiians (still living in stone age) used the summit region for a major mining operation - quarrying hard basalt rock for their tools (mostly adzes). Substantial mine dumps (tailings or spoil tips) near the summit can be still observed. On this video is a mine dump the size of about 5.8 acres and the total area with signs of mining covers about 100 acres! By the way - this can serve as a prime example of the environmental impact of even the stone age cultures!
Ancient Hawaiians used the mountain for a major industrial operation (within the context of their technology) and modern Hawaiians are in the process of turning it into an untouchable holy mountain and making it into a substitute issue to voice their political, national and religious grievances.
This is how religions evolve, morph and transform and respond to ideological demands, how holy mountains are born.
-----------
#Hawaii #MaunaKea #HawaiianReligion