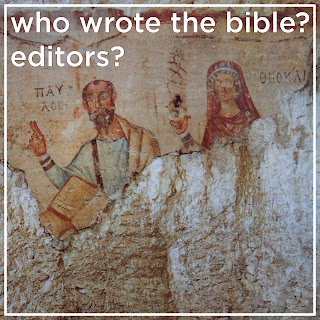 The last two months we’ve been asking “Who wrote the bible?” In the process we made some surprising, eye opening, and liberating discoveries. Below in this blog you can check the older articles and here you can find some older videoclips and sermons.

But the Bible which we have in our hands was not finished when the last ancient author put down the pen. The biblical authors were followed by editors and translators. And you might be surprised how much “creative” freedom they exercised!

For instance, they could invent and include an entire biblical story. Good example could be one of the best known biblical stories about a woman caught in adultery with the even more famous pronouncement who is without guilt throw the first stone. This entire story was not in the Bible for several centuries! It is certainly absent from the earliest manuscripts. And when it was finally included, it was not always where it can be found now (in John 8). Some manuscripts had it at the end of the Gospel of John and some others in the linguistically and stylistically more fitting gospel of Luke. So, here you have an example of what editors could do! It is a beautiful story and very much Jesus-like, teaching tolerance and forgiveness, there can be hardly any opposition against it.

But there are also more sinister changes to the Bible. For example, those which were generated by the vicious misogyny of the later church. And so ancient editors and biblical translators (some of them until now) actively engaged in gender change of a number of biblical characters.

In the original texts of Pauline letters were some prominent female characters like Euodia, or Synthyche (in the letter to Phillipians)  or Junia (in the letter to Romans) - but by different hands at different times, by different editors and translators all three of these women were made into males. We know (because they told us) that at least some of those who did it were unable to accept the reality that proud and strong women played important roles in early apostolic church.

And so conservative patriarchal editors and translators (among them the translators of the King James Bible) actively engaged in quite a radical activity of gender change.

And these willful textual gender changes are something you might not know about the bible.