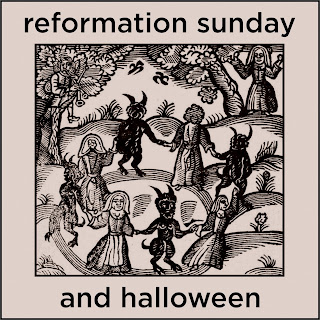 One of our most watched video clips on YouTube is “Something you might not know about Martin Luther”.  It is provocative (definitely for some) but a truthful take on Luther’s visceral medieval belief in the existence of the Devil. Here is the link to this short video: https://youtu.be/-KPOMmDSPHU
It became so “popular” because many faithful Protestants (especially Lutherans) became quite uneasy and unhappy about the content and shared their opinions and comments.
I was born and brought up in one of Europe’s union denominations which was composed of both Lutherans and Calvinists and thus I received a thorough Lutheran upbringing and education. That way I know that true Lutherans do not worship Luther. He certainly was not a saint, he was a father of reformation but also a son of his time and shared many diverse and dangerous prejudices of his time.
Besides the Devil or Satan, he also staunchly believed in the existence of witches. Luther is on record accusing witches of throwing charms on little children causing them such a sharp pain that they cried themselves to death. (Table talk in February and March 1533).
He also accused them of spoiling milk, eggs, and butter and for these minor infractions he approved the popular opinion that they should be burned (Table talk on 25 August 1538).
We all know that was not a joke and how destructive this prejudice was costing hundreds and hundreds of innocent lives of those who for many different reasons did not fit within a tightly knit & rigid medieval/early modern society.
But before we get all smug and finger pointing, accusing or ridiculing bigoted Luther and his superstitious times (or on the other side defending indefeasible!) - let us look where we are in our own world!
Modern anthropologists (folklorists) find peculiarly close parallels between medieval witch prejudices and our modern anti-vaccine conspiracy theories.
They share similar levels of prejudice, fear, and irrationality; similar tidbits of facts chained into the most bizarre combinations; similar illogical connections and narratives; and similar dangerous/destructive consequences - costing lives. Costing lives of those ensnared by these superstitions and unfortunately costing innocent lives of people around them.

And that is something you might not know about ourselves and about our very own and dangerous superstitions and bigotry.

And now a word of hope and encouragement - Luther himself insisted he was not saved by his own goodness but by divine grace alone. We do not need to censor him or whitewash him. He certainly was a very conflicted and complex figure and he remains a bridge person from medieval prejudice into a more modern and more rational, enlightened paradigm.
And exactly in this tension and transition between past and the future Luther can be our inspiration and our hope right where we are, tormented by our own manifold irrational political, medical and social conspiracy theories.

Join us as we learn from the past to reach out forward for liberation and divine grace.

And here is a video version of this blog.