Our city (NYC) proverbially never sleeps and I think it is one of its biggest problems. In the subway and on sidewalks I see rows of zombiaits (zombie-like people) who clearly have not had enough sleep for many nights. Such lack of sleep is self-defeating, because a good night's sleep has curative properties, and good sleep keeps us sane. Eyes can spark again, and minds get nimble after a good rest. Just ask neurologists, psychiatrists, and psychologists.

I am just a church minister who likes to study Ancient Near Eastern religions, so I can give you some ancient religious examples of healing dreams. The practice is called incubation. It was an ancient religious practice which sought divine healing and revelation in a dream.

A Ugaritic Text from the 13th century B.C.E. tells us about a legendary king Keret (also transliterated as Kirta, Kereteu etc.) who deals with a catastrophic situation when he lost his entire family. He is on a verge of desperation. Right at that moment he receives a new direction and a new hope in the form of a divine revelation in a dream:
(King) Keret was deprived of his house
deprived of all his family,
his entire posterity.
He went into his chamber weeping,
he felt bitter and sobbed.
His tears poured down like troy ounces to the ground,
like pound weights onto his bed.
In his weeping he fell asleep,
in his crying slumber came.
Sleep overpowered him,
he laid down in slumber and curled up.
Then to his dream, El came down,
to his vision Father of Adam.
He stepped near to ask Keret:
‘What happened to Keret that he weeps,
that the page of El sheds his tears?
Ask for kingdom of Bull, his father,
ask for dominion of the Father of Adam!’
(KTU 1.14.i. 23 - 43)
The revelation is too loooooong to quote here and is a basis of unfolding drama of the entire epos. I know that this quotation from Keret does not look like much, certainly not like any ritual. It sounds like a spontaneous and unsolicited revelation dream. But it has a very close parallel at the beginning of another Ugaritic epos about the legendary Danel (Daniel). Chieftain Daniel is childless and seeks divine advice and help. His approach is much better organized and the symbolical repetition clearly outlines some kind of religious ritual:
One day and a second,
Danel girded up his loins,
thus girded he served the gods a meal,
thus girded he gave the holy ones to drink.
A third and a fourth day,
Danel girded up his loins,
thus girded he served the gods a meal,
thus girded he gave the holy ones to drink.
A fifth and a sixth day
Danel girded up his loins,
thus girded he served the gods a meal,
thus girded he gave the holy ones to drink.
Then Danel took off his robe,
he took off his robe, went up and reclined (on the temple roof)
he took off his clothes and went to sleep.
And behold!
On the Seventh day Baal drew near in favour,
because of Danel’s affliction, the man of RPI,
the groaning of the hero, the man of HRNMY
(KTU 1.17.i.5b-18a)
Both these incubation stories are positioned at the beginning of lengthy epical compositions and they set a stage for the following outwinding drama, just like Jakob’s dream in Bethel (Genesis 28:10ff) or Samuel’s dream in Ramah (1 Samuel 3).
The ancient practice of incubation was intended to induce prophetic dreams (for direction or healing) by intentionally sleeping in religiously significant places (such as temples or some other holy places).
Many centuries later, Hellenistic temples of the god Asclepios included sizable dormitories. Afflicted petitioners waited there for a dream in which the god would either heal them outright or reveal to them an appropriate ritual, procedure or some other secret necessary for their healing. One of the early testimonies is captured on this gratitude inscriptions from the third century B.C.E.:
The blind man saw a dream, in it Asclepius came up to him and with his fingers opened his eyes and he first saw the trees in the sanctuary. When he woke up, he walked out healed.
This inscription alone has some interesting contact points with several new testament healing stories. It is even possible, that some kind of a Asklepion (Asclepios’ healing center) is described in John 5:1-18. 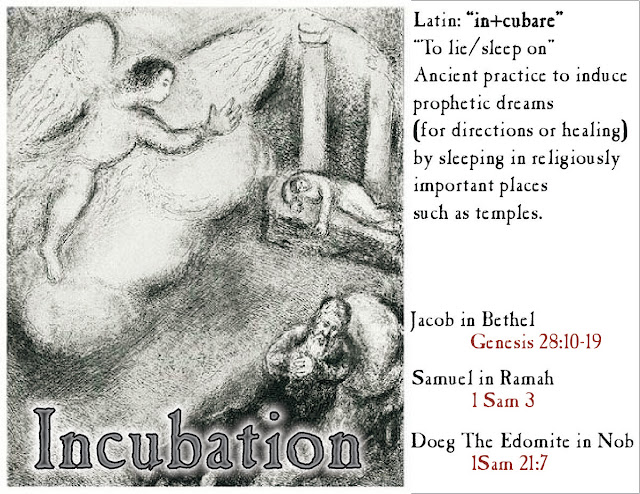 My message to our city which never sleeps is simple, close at least one eye occasionally. Good sleep has healing properties! Dreams can cure! Dreams have power to clarify the vision and bring hope again. Just look at those famous dreamers, Keret, Daniel, Jacob, Samuel, or Martin Luther King. Their dreams had surprising power to transform not only their lives but also to heal or change their society and world.