Do you like hodgepodge? I love it! Although, back at home we would probably call it eintopf (“one pot” in German).And one such hodgepodge is coming our way this Sunday. The Biblical reading this Sunday is the fabulous story of the Magi. Matthew, or perhaps oral authors before him, pulled together all the material they could lay their hands on: different and incredible stories and traditions.Here are some of the ingredients:

1) Fresh in their mind was a flamboyant royal delegation from Armenia, which suddenly appeared in Rome at 66 C.E.

1a) And indeed, this delegation reportedly returned by another way.

2) They mixed in their faint notion of the eastern Zoroastrian religion with its mysterious priests called magi, (this professional title still survives in our vocabulary although with a very different meaning.)

3) Their ancient world-view counted on the heavens and the earth being connected as if by strings. Stars influenced the fate of humans, and some special humans (such as Alexander, Mithriades, Julius Caesar, or Abraham and Moses) received special attention from the stars.

3a) Even "a traveling star" [sic!] could lead Aeneas all the way to a specific place for the future Rome.

4) From old biblical prophecies they quoted some old ones about David’s birthplace thus hinting at messianic expectations.

4a) They also alluded to several more prophesies about the rising star of Jacob, or to

4b) psalms about nations and kings bringing their gifts to lowly Judeans.

5) And finally they flavored it all with the classical narrative plot of powerful enemies conspiring against an as-yet unborn hero.

The result is a magical story of Magi; marvelous, captivating, heterodox, contradictory in places, yet still blended and well balanced. It is a story pulled together in the poetical subconscious of an inspired early Christian community. It is a story which throughout the centuries has triggered human creativity and imagination. Come this Sunday to see how it can speak to our world today, how it can challenge the church and how it can inform and broaden our faith. We will join Magi's Mystery Tour ;-)

And one collage of a legend speaking to realities of our world. 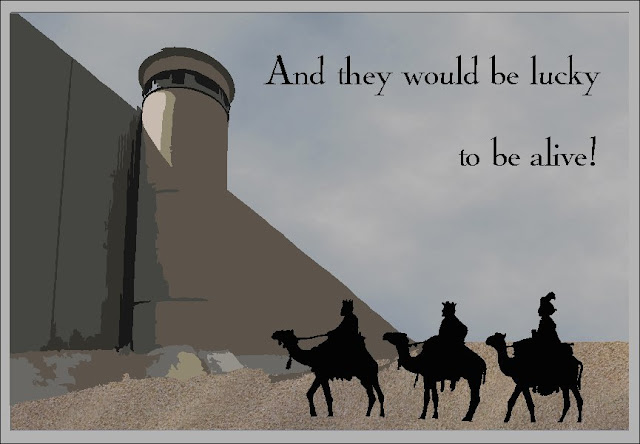