Have you ever been afraid of monsters? Have you ever had nightmares?
I am almost certain that you have. To different degree, monsters and nightmares are our shared experience. They represent the dark side of what makes us human. Every culture, every language, every tribe or nation has list of monsters. Even the Bible has panoply of monsters and demons, sea monsters and swamp monsters and fiery snakes and demons of pestilence.
There are several human strategies on how to cope with monsters. The most common and straight forward strategy is to fight them and chop off their heads. The monsters (or fear of monsters) can be fought across the whole time spectrum. The fight could take place in the past, in the approximate present as well as in the future. 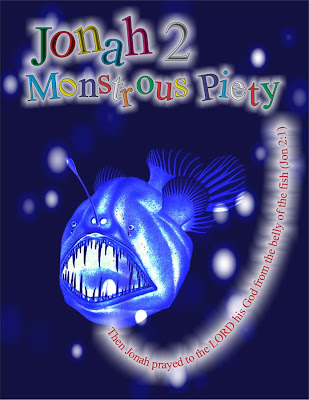 Biblical testimony utilizes all the previous head chopping strategies. Unfortunately there is a problem with these fight and defeat strategies. Chopping off monsters’ heads usually does not work; monsters can grow new heads quickly as we all know. But Bible presents one special and surprising approach -- I call it “domestication”. With this approach the existence of monsters and nightmares is not denied, monsters are not being sought, fought and cut in pieces. They are accepted as part of the world, they are perceived under divine rule together with the rest of the world. This domestication strategy is surprisingly effective. It deprives monsters of their nightmarish evil streak and supra-natural dark aura and makes them into overgrown puppies and calves (Psalm 104:25f or Job 40:10ff). This is an example of biblical realism, and a recognition, that true monsters might not be lurking out there, but inside here.
This Sunday we continue with the Book of Jonah. The second chapter is an excellent example of this domestication strategy. A primordial underwater monster (larger-than-life fish), obeys every divine command, while the rebellious prophet cannot be bothered, not even in his “devout” prayer. Isn’t it an interesting insight into the whereabouts of monsters? Are they really external or is it possible that they are internal and masquerading in piety? Is Jonah in the monster or do we observe a prophet with a monstrous problem?
----------------------------------------------------------------------
And one more observation from the evening after original posting:

This evening Rutgers Community Programs celebrated Chinese New Year. This year being the year of Dragon brought to us many dragons dancing on and off the stage. It was interesting to observe reactions of the little ones in the audience.  When the first dragon appeared and danced vigorously among us, all Asian babies were in the seventh heaven, while some European kids started to cry. In Asian cultures dragons are good spirits, for Judeo-Christian people they represent dangerous monsters. Ah, those inbred archetypes! 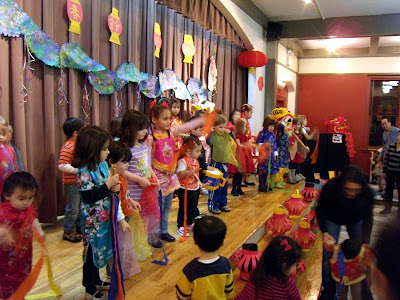