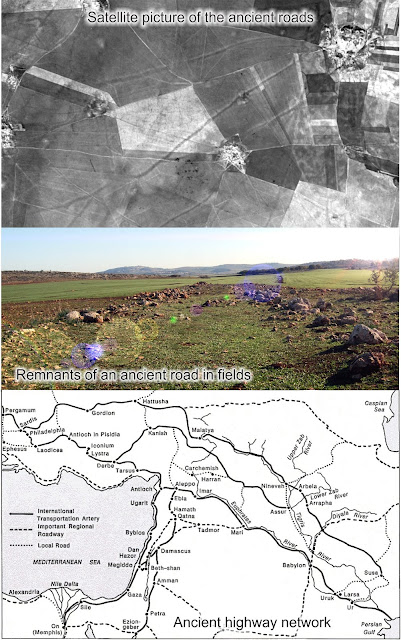 I am not making it up; ask any anthropologist, cartographer, or civil engineer. Broad roads have always been built primarily for armies. The American Interstate System was originally devised and developed with civil defense and the army in mind. (The original official name indeed remains: Dwight D. Eisenhower National System of Interstate and Defense Highways). The famous German Autobahns were started just days after the Nazi took over in 1933. The ancient Roman road system was built by Roman engineers primarily for the Roman legions.
The first known extensive highway system was built by the Assyrians to expand and dominate their empire (probably the first known superpower in history).
When we hear about Jonah preaching in Nineveh (the capital of Assyria) it was a direct challenge to the Assyrian's “evil ways.” Archeologists and anthropologists know these ancient ways and roads. They survey and excavate them. We can all learn from those ancient roads (their surveys and excavations) and so understand whether the Assyrians truly and sincerely turned from their evil ways. And even more importantly, we can ourselves individually and collectively learn more about this divine cartography and about our own choices between the ways of life and the ways of destruction.
--------------------------------------
2012-03-21 One very efficient way of surveying ancient archeological sites and roads is through aerial or satellite mapping/pictures. Ancient abandoned sites and roads tend to show out with different colour of soil. Recently there was an interesting article in the BBC science section about the use of aerial archeology in the above mentioned part of the world (Northeast Syria and Iraq).