The Hebrew Bible is surprisingly aflush with mythical primordial monsters which it shares with other Near and Middle East religions and cultures. It is especially surprising when you consider that is coming from one of the driest parts of the world full of savannas, deserts, and semi-deserts.

Probably best known among those monsters is Leviathan. In Ugaritic known as Litanu. Sometimes it is paralleled with a serpent monster, possibly with seven heads.

Next well known monster could be Behemoth. Possibly a bull like amphibian beast present in water as well as on land. One is almost led to imagine it like a monstrous hippopotamus. In ancient Near East sources it might be associated with similar amphibian monsters like Atik and Arshu.

Besides these two well-known water monsters there was also Tannin, known in Ugaritic as Tunnanu. There are signs it was perceived like a monstrous crocodile but likely with two tails. This monster eventually made it to the Greek language as Tuna fish  and thus also into our tins. ;-)

Then there was a monster called Rahab known possibly just from the Bible. But there might be two instances of it in broken and obscure Akkadian texts. It is also likely that this monster was known under its descriptive names like for instance “Seven-headed Serpent”, or “Encyrclerer”.

Finally there was Tehom known from Babylon as Tiamat, a monster of primordial chaos. In the Bible Tehom is often demythologized as "the ocean deep", but there are also well documented instances where it is clearly a divine or semi-divine demonic figure (for instance in Job 28:14 or Pslam 42:8).

And the presence of all these mythical monsters in the Hebrew Bible is something you might not know about it.

All these sea monsters are clear vestiges of a rather complex creation mythology. The world was created and made habitable by all these monsters being slain, vanquished or at least captured and kept under check.

The first battle happened at the beginning of time. The forces of chaos were defeated and an orderly and civilized world came into being.

Unfortunately, some of these monsters, or the forces they represented, were only rebuffed or perhaps they escaped. They need to be constantly under check. That is the source of persistant anxiety as well as a reason for many prayers. And in this context we can observe these monsters being linked with historical enemies: Egypt, Babylon, Hellenistic kingdoms or later in the New Testament Rome.

But the final and complete victory is coming. These monsters will be decisively defeated at the end of time. This part of the myth is for instance present in the biblical book of Revelation in its vision of the final victory over the dragon.

As you can see, this is a rather complex tripartite monster-mythology embracing the entirety of time. Its presence in the Bible is another thing you might not know about the Bible.

All of this is, as you can recognize, quite a dense mythological material. It does not fit neatly with biblical monotheism and its program of toning down old mythological references. And so the biblical scribes and editors used several strategies to make it fit with their overarching program.

Firstly they re-naturalized these monsters. They attempted to return them back to the beasts from which they most likely originated. There are clear attempts to portray Behemoth as hippopotamus, Tanin as a crocodile, and  Leviathan as a whale.

Secondly and somehow overlapping with the previous strategy, these monsters were “domesticated”. They were made less horrifying and even portrayed as playful. For instance, Psalmist (Psalm 104:26) describes Leviathan as created by God to romp in the sea.

The next step was when a sea monster was made to faithfully serve divine purpose. In the book of Jonah a sea monster follows divine command and swallows a rebellious prophet. Being thusly swallowed by a monster must had been the stuff of horrid nightmares! But then we realize that the monster had a hard time keeping the rebellious prophet inside. And as soon as God allowed, it vomited him on shore (Jonah 2:10).

Such use of a mythical sea monster for parody and comic effect was the last stage of the biblical demythologization of monsters. And that is yet another, third thing, you might not know about the biblical monsters. 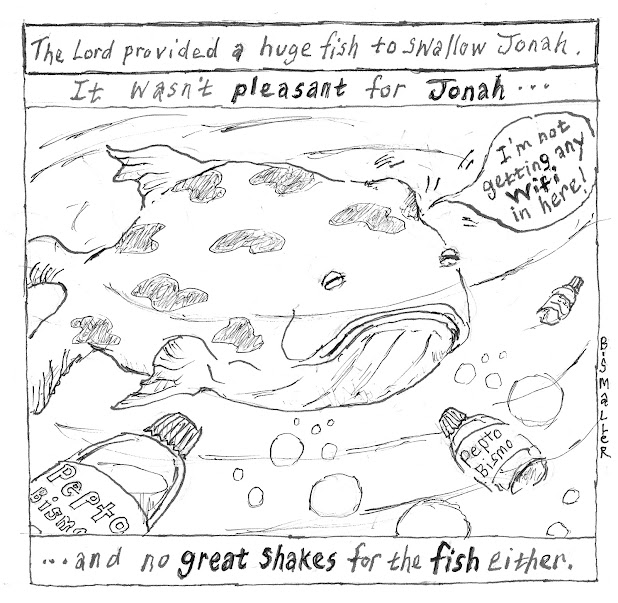